Italy Day 17 – Lunch with the Pope

Well maybe. Actually no, he's not even in town. But the title sounded good. Today we toured the Vatican. The Vatican is a walled enclave inside the city of Rome. ½ square km, population is less than 1000 made up of mostly catholic clergy and swiss guard. It is the smallest internationally recognized independent state with its own national anthem and flag. The official language is Latin, but Italian is widely used. While not part of the EU it does use the Euro. It has been the residence of the Pope since 1337, presumably since that pope moved from the Castel San Angelo up the river. The Pontifical Swiss Guard has been in charge of security since the 16th century.

A shot from yesterday but you can see the wall of the Vatican and St. Peter's Basilica. Papal apartments to the right of the dome.

The Swiss Guard came to be January 21, 1506 when pope Julius II (1503 – 1513) started recruiting mercenaries from the German speaking areas of Switzerland. They were fierce, disciplined fighters and very loyal when paid well and given lots of meat to eat. The inductees had to satisfy certain criteria; just under 6 feet minimum height, under 30 years of age, must have had military training in Switzerland. Motto is Fortier et Fideliter (with strength and loyalty).

Despite what it looks like his eyes were open. He wasn't sleeping, just bad timing on my part.

St Peter’s Square was designed by Bernini in 1656. The square is made up of two conjoined spaces. The first is the elliptical Piazza Obliqua with the semi-circles of covered colonnades, central obelisk and fountains. Atop the colonnades are 140 marble statues of saints, martyrs, popes and founders of religious orders. The ashes of Caesar are said to rest at the foot of the obelisk and a relic of the Holy Cross is hidden in its tip. The obelisk was found in the Circus of Nero’s palace and erected here in 1586. From the fountains, the 4 rows of columns in the colonnade line up into one. Closer to the church is the trapezoidal Piazza Retta which grows wider toward the church. 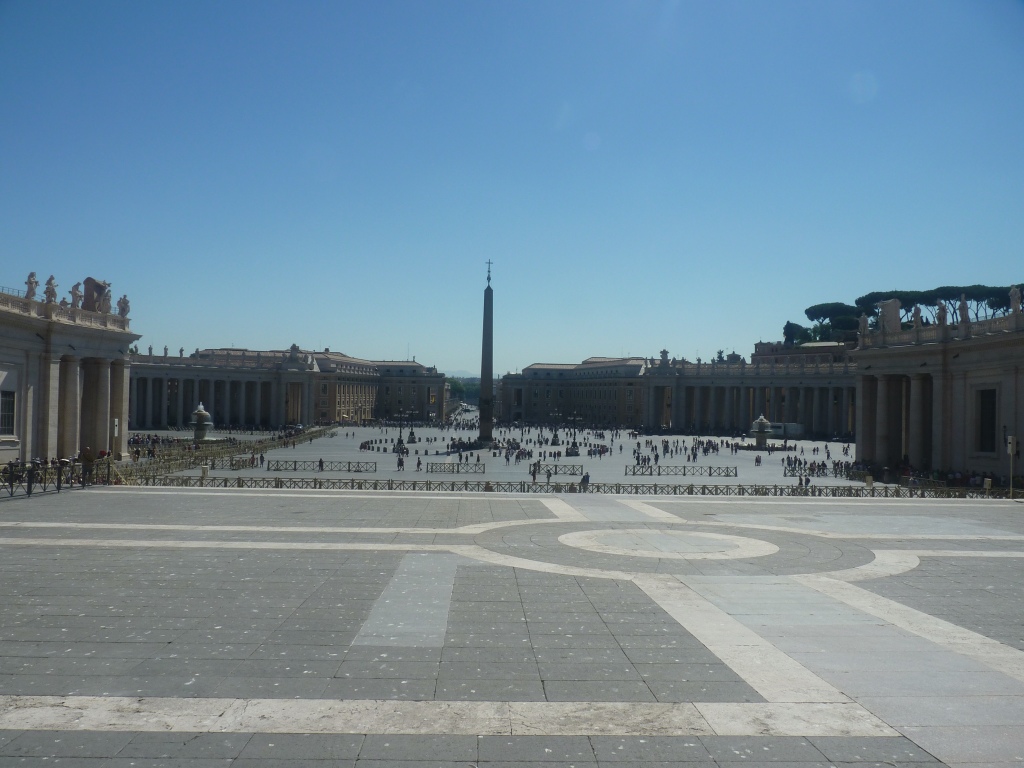 St Peter’s Basilica is at the end of the piazza and where we started our tour day. The apostle Peter is said to have been crucified upside down in Nero’s stadium in 64 AD. The Christian emperor Constantine built the first church in 319 atop the spot where Peter’s grave was said to be. The original church was demolished in 1506. Michelangelo, Bernini and Bramante were the primary architects of the current building which dates from the Renaissance, built between 1506 – 1626. Under the triangular pediment is the balcony where the pope gives blessings. Above this, huge statues of Jesus and 11 apostles stand but somewhat ironically no Peter. Around the dome inside are the words “Thou art Peter and upon this rock I will build my church and I will give unto thee the keys of the Kingdom of Heaven”. 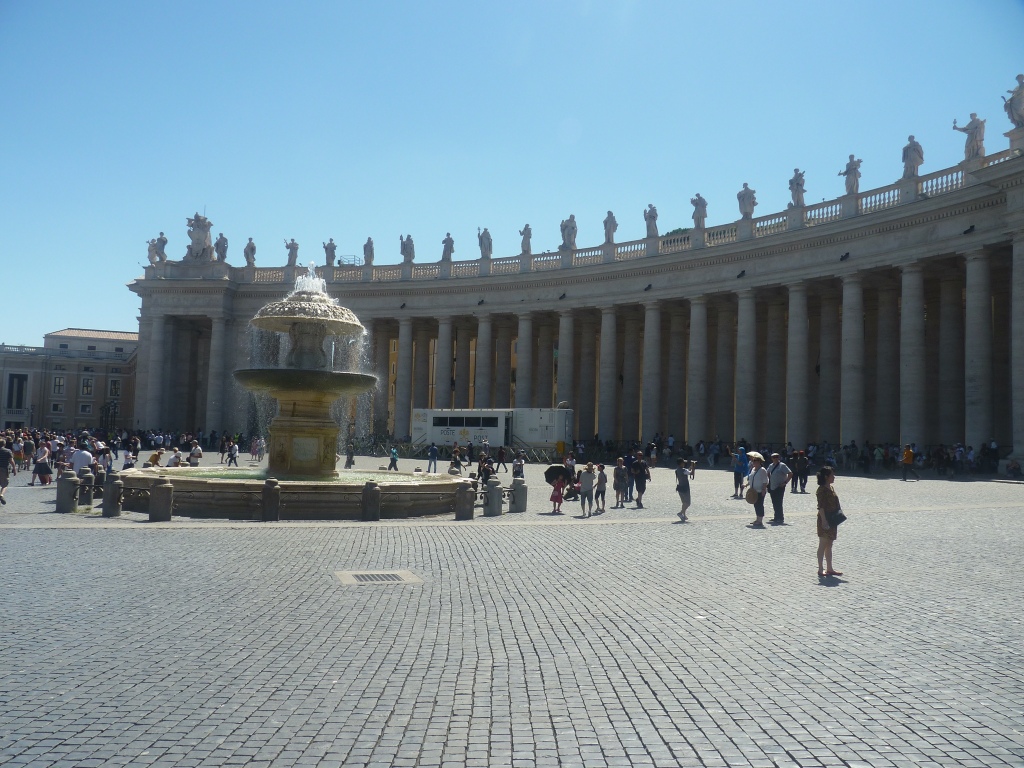 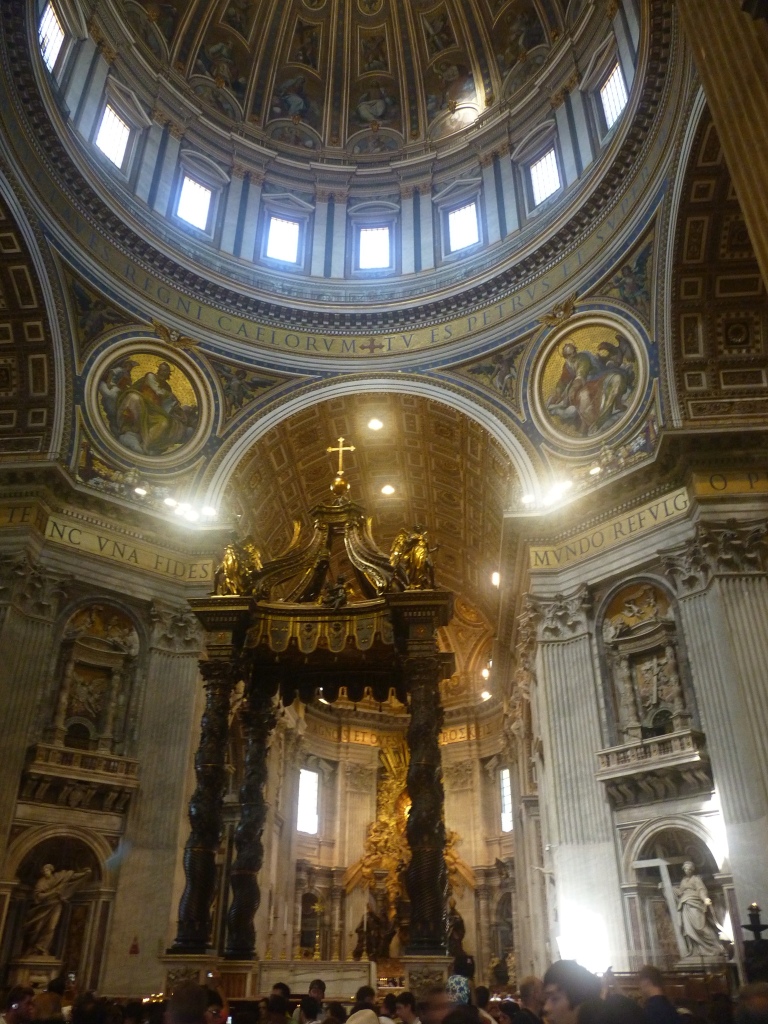 Also inside is Michelangelo’s Pieta. Carved in 1499 when he was 24, it is a depiction of Mary holding the body of Jesus after he was removed from the cross. Commissioned by a French cardinal for display on his tomb. Carved from a single slab of marble. Michelangelo’s signature can be seen across Mary’s chest – it is the only work he ever signed, because he later regretted the act of vanity. In 1972, a Hungarian tourist attacked the statue with a hammer, knocking off Mary’s left arm and damaging her nose, cheek and left eye. It took 10 months to restore her. And now of course it's behind bullet proof glass so a blurry shot is all we can get. We saw a copy in the Vatican Museums.

It was very hot, and we had time so we opted for an early lunch. We beat the rush and made our 130 reserved ticket time for the Vatican Museum easily.

Laocoon group – a father and his sons fight a magic serpent. This one is a copy at the entrance to the museums. We see the original later – not in quite as good shape.
A copy of the Pieta. Much easier to get a great shot here (except for the open window!) 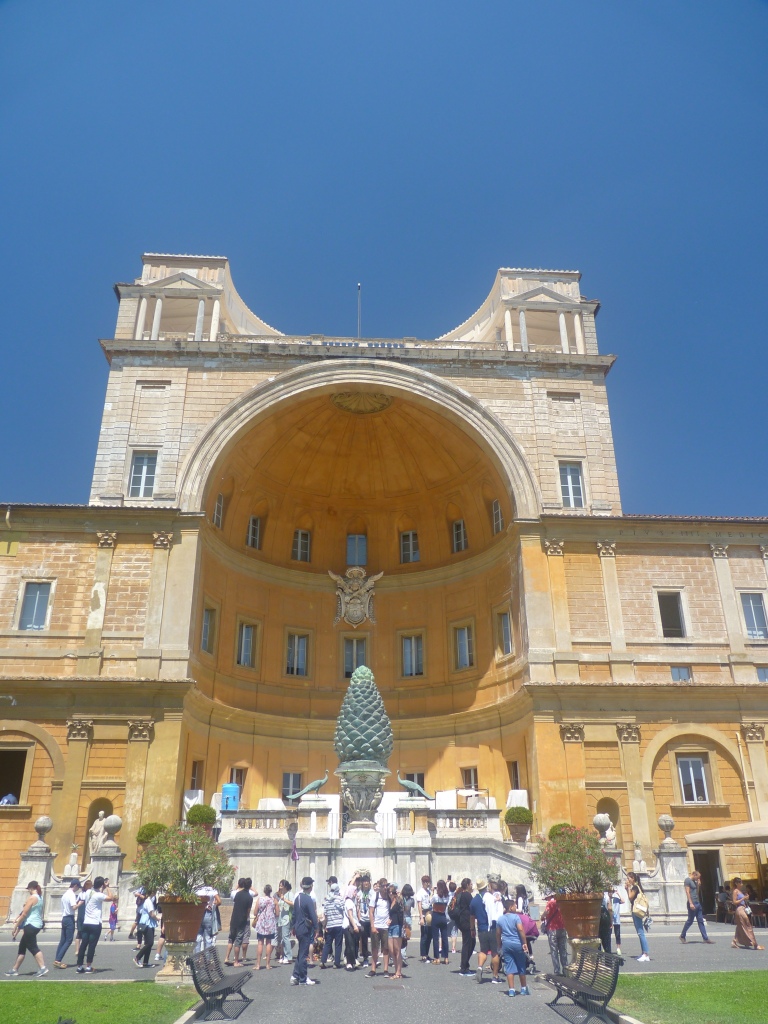 Some more modern sculptures. This one from 1990.

This museum is so huge that you can really only see a very small part each trip. We picked statuary and the map room as two main things to see. 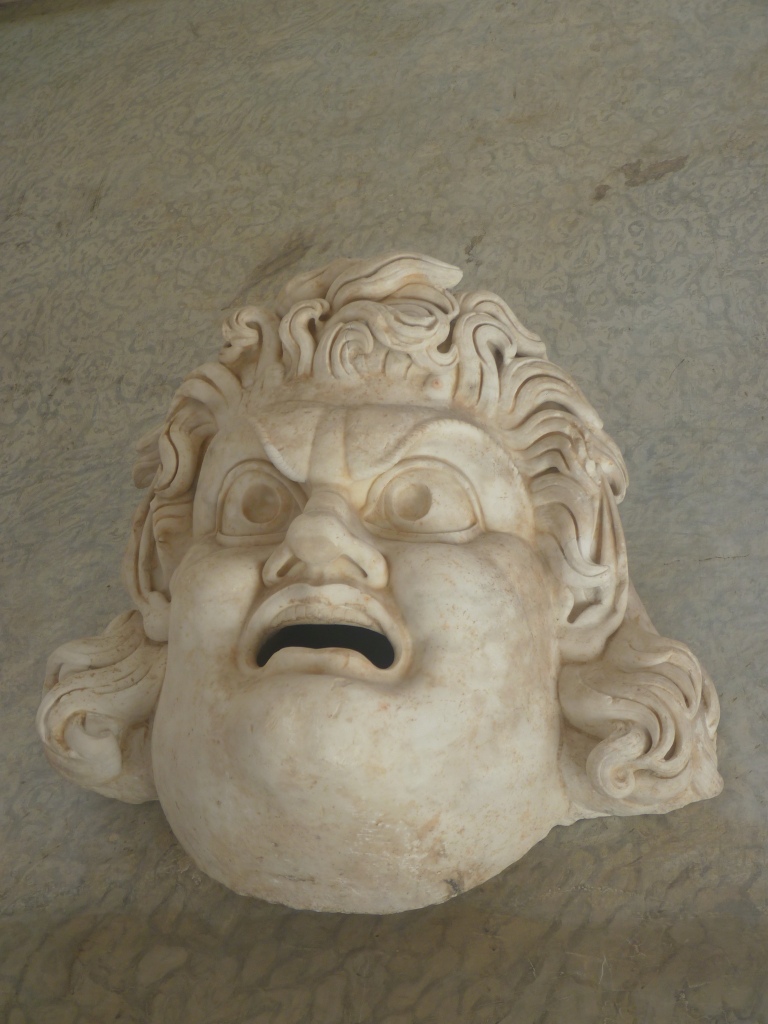 The original Laocoon Group – missing a couple of hands and maybe a toe or two. Very cool to see the real one though. 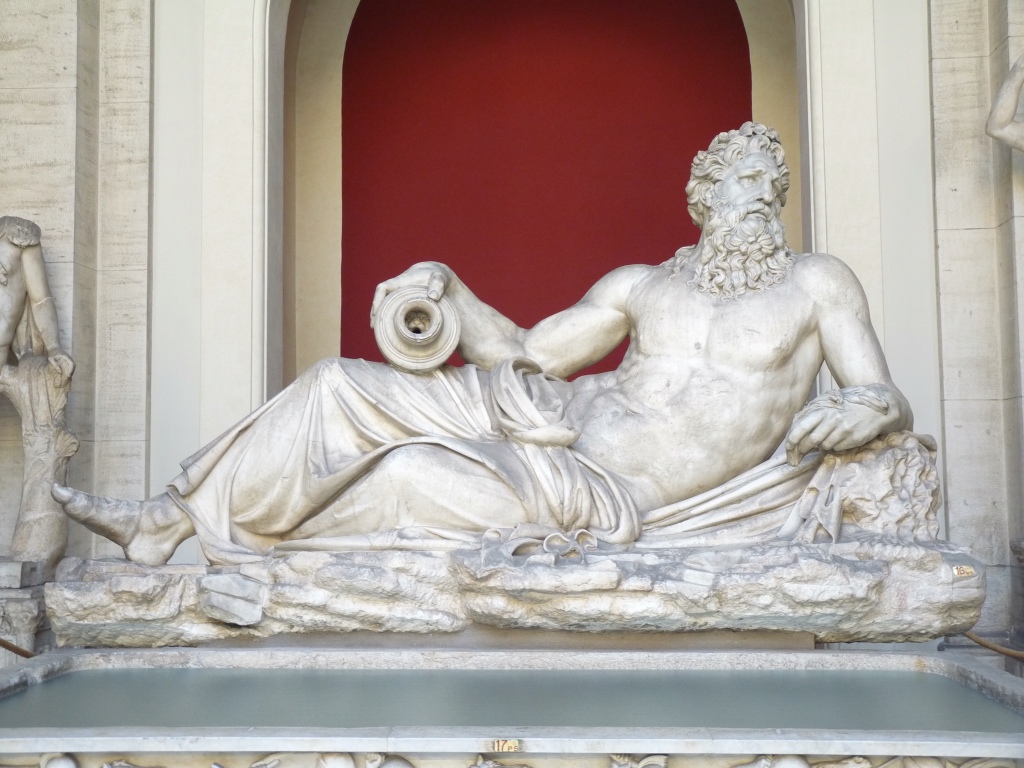 And random art on the ceiling/walls. Stuff is everywhere you look. It got overwhelming after a while. It is said that if you spend one second looking at every piece in the Vatican Museums, you can spend a lifetime inside (or many years anyway). 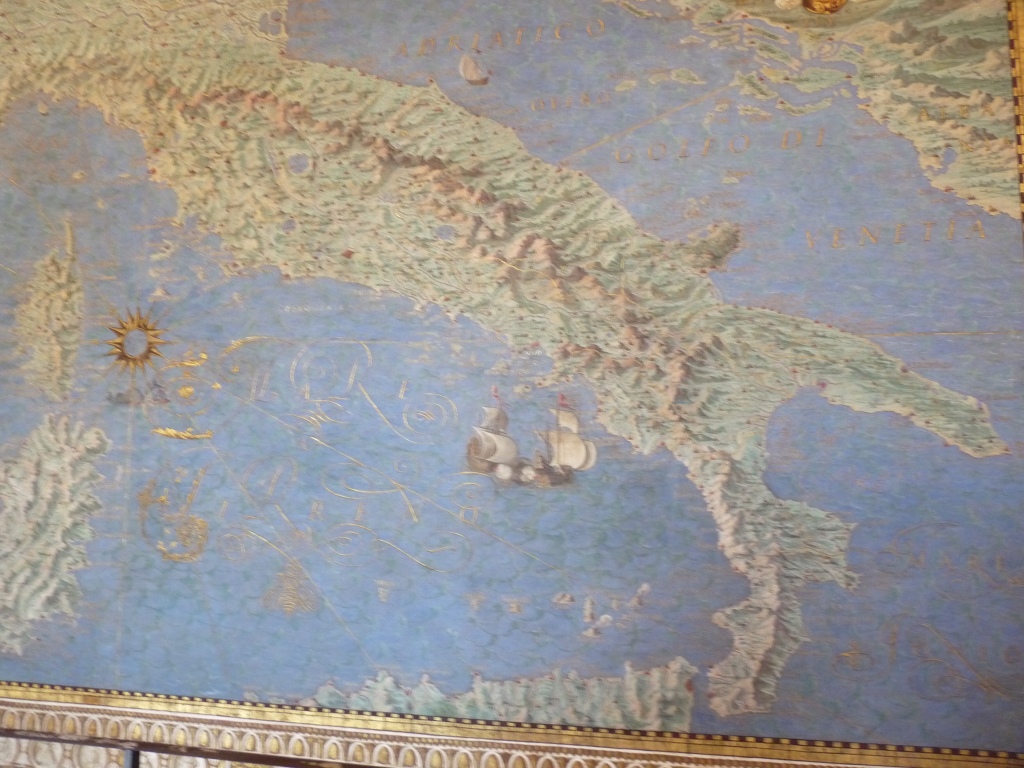 Just in case you get bored looking at the maps, you can also look up. The ceiling in the map room was one of the most impressive things we have seen anywhere. And it goes on for at least one or more city blocks!

The Sistine Chapel, now part of the Vatican museum was built in 1473 – 1483. It is the site of the papal enclave (the election of a new pope). The famous ceiling was painted by Michelangelo between 1508 – 1512. No photos of course. But not for the usual reasons. Nippon TV funded the restoration and as such got exclusive rights for photos, video, books and postcards. Those rights actually expired in 1997 but they kept the rule.

We did however buy some postcards. Here are some photos from the net:

God creating Adam – probably the most famous frescoe in the chapel.

Let's just say I was impressed. Really impressed. Seeing this near the end of the trip shows me how much work this really was. Had we seen it in the beginning I may have been more jaded.
At this point we were cooked for the day. So we returned back to the hotel to cool off and rest a bit. Dinner was down the street where the waiter recognized Eric's emergency baggie of noodles as GF. Turns out his kid is celiac too. Made for some interesting discussion. We also had an interesting chat about Roman artichokes (apparently Kris needs to come back in February, as that is when they are ripe and fresh. Any that we could get today would likely be from a jar, or possibly imported from elsewhere).
Tomorrow is our last day in Rome. We plan to see stuff we didn't get to on our first day.