India Day 13 – Tea with Tigers and off to Khajuraho

Well last night we boarded up a small hole we found in the outside wall near the bed. No reason a desk drawer and some pillows can’t be a good fix? No nightly visitors. Yay!

Another 450 AM start to go on a game drive. And yes we saw a tiger. 2 in fact. Well four if count the ones that the rangers saw as they entered the grass. We saw the grass they were in, but not them… They sure blend well.

Anyway we saw a 3 year old female sleeping in some bamboo first. You are allowed about 5 minutes (Indian minutes mind you) with the animals then you must leave. Our drive Chawbey is a smart man. We always seemed to give the wardens/rangers a ride somewhere or a seat while near tigers. I can tell he’s a good guy in general and nice and all, but he’s also smart in that he’s friends with the guys who have the power. We were always shooed away last…..

We then heard via a Ranger that there were two tigers on the road. Thanks to Chawbey’s connections we were first on scene. But the tigers had moved to the grass by the time we got there. So those are the ones we saw but didn’t see. Oh well back to the other sleeping lady…

Just before we got there, about 150 feet back our guide for the day (whose name we never knew) stopped us to see the her brother, a male tiger about 100′ into the bush.

He eventually decided we were boring and wandered off.

So back down the road we go to our first tiger again. They have an artificial watering hole that they fill every 2-3 days. Both make sure the tigers have water and also safely provide a good view for us tourists. Today was water fill day. So she woke up a bit and was mildly interested. As only a cat can be interested.

First she had to scratch an ear.

Then was, then look out and see if the water might be good enough to drink. 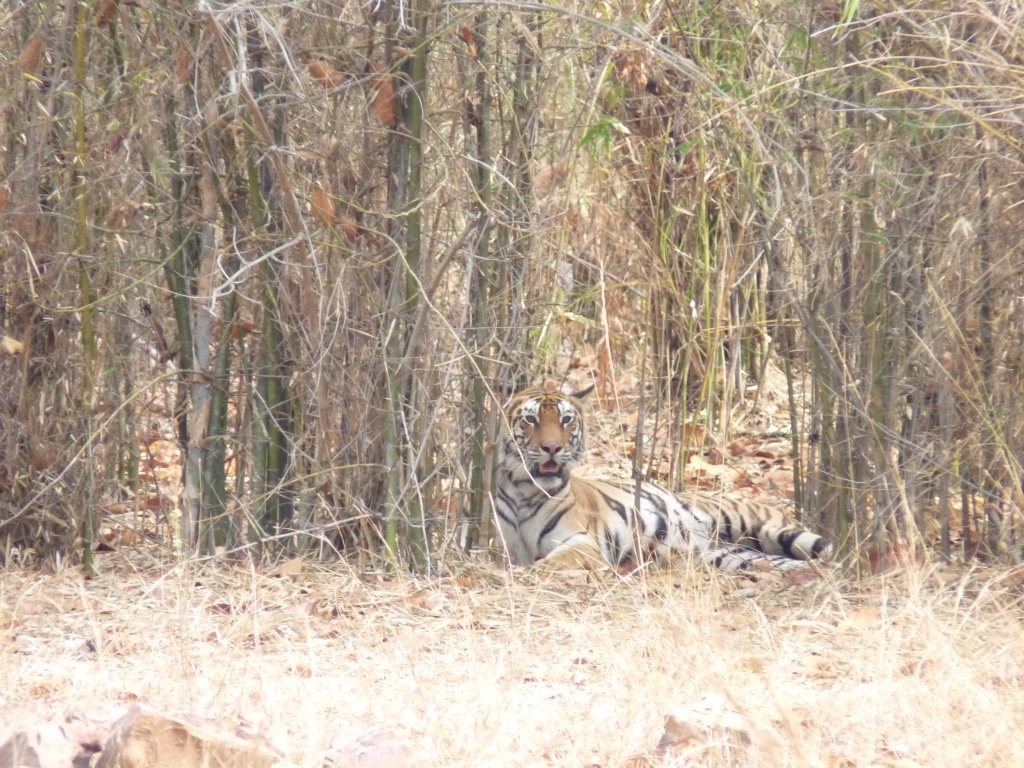 I mentioned Tea With Tigers. Well around 8am yesterday we had gone to a rest area. But the shot above was right around 8am. No one wanted to leave. So Chawbey being the smart guy he is went a short way down the road and we had tea and coffee. Still being able to see her. Decadent indeed! 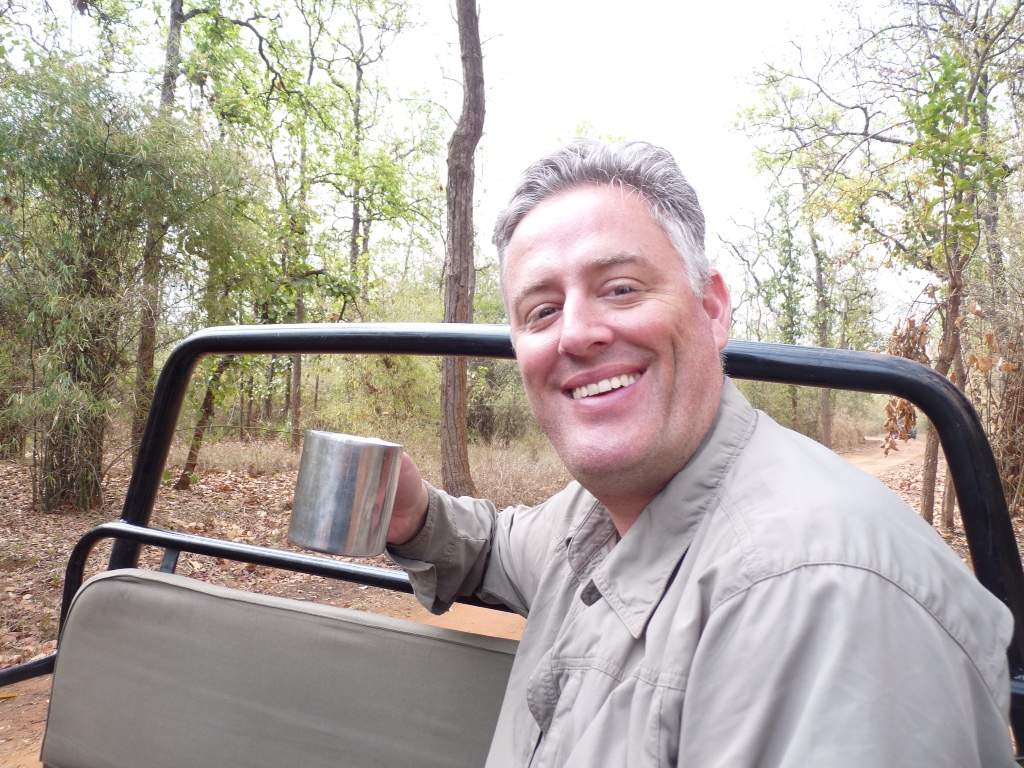 Here is a good shot of what a Tiger Traffic Jam looks like. Now you know why they need Rangers to shoo people away.

Yesterday we visted a bat cave. I forgot to include the photos, so here they are now. 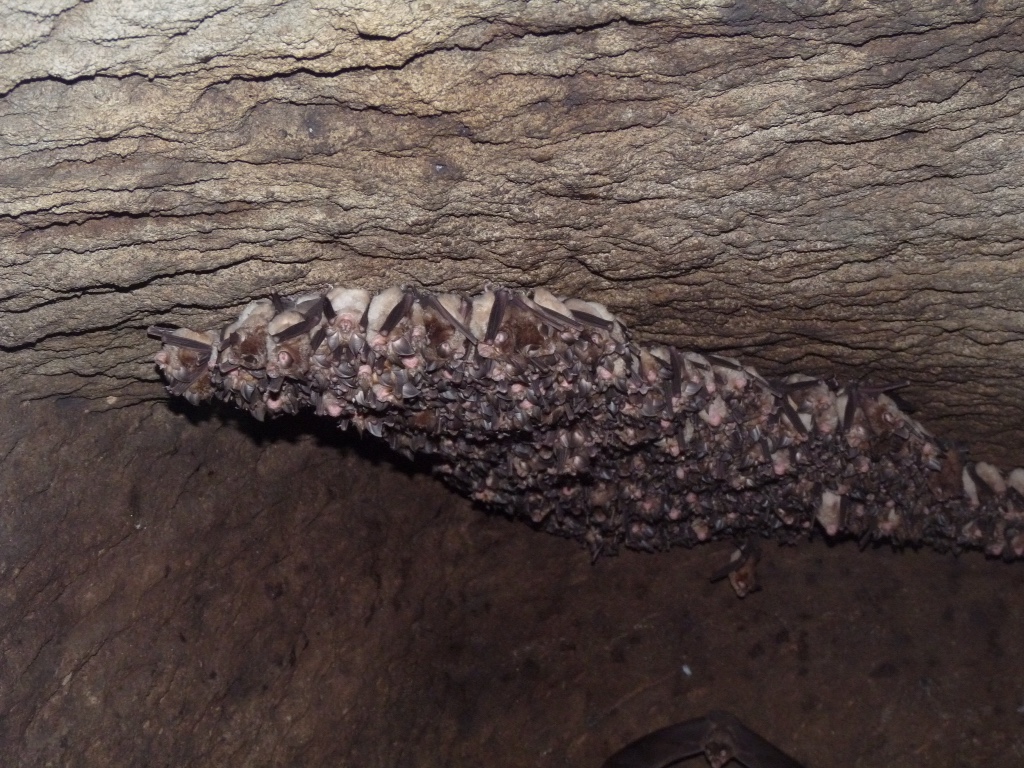 This is man made (or enlarged by man) to house the Maharajah’s Army back in the day. There is a fort on the hill where he used to stay.

Also last night we were treated to a Bush Dinner. This is a private setting surounded by kerosene lanterns. Amazing this place!

Then after our safari this morning we were asked to follow them. With no idea, they did this. 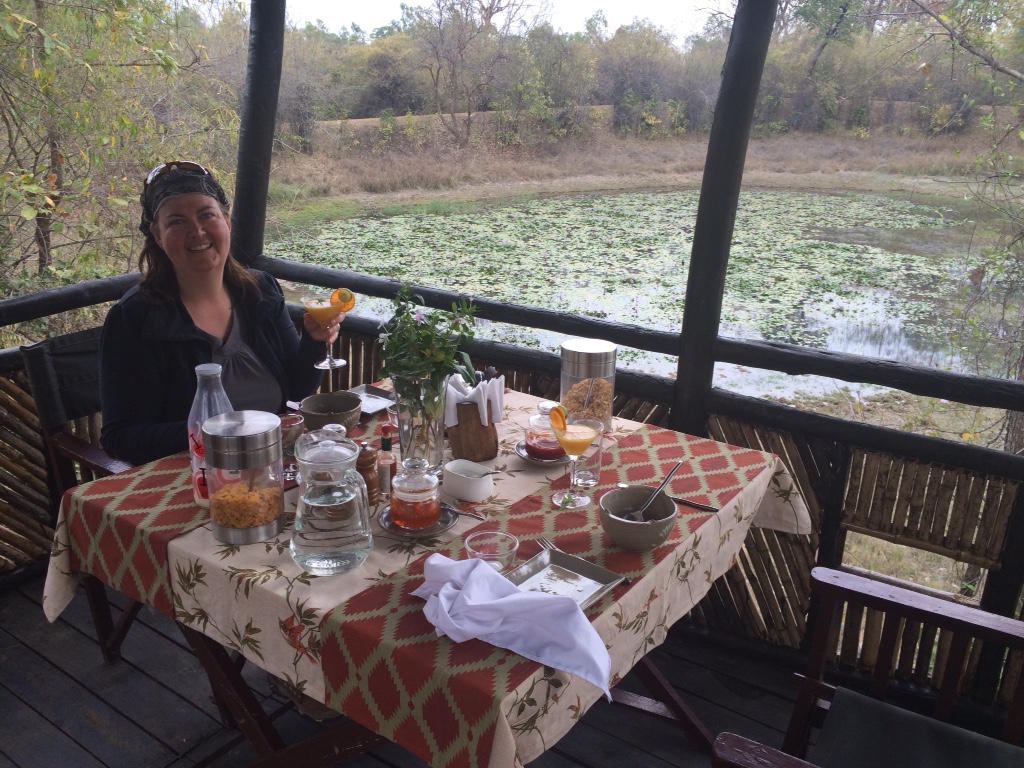 Private breakfast up on the watering hole viewing platform. Best service I’ve ever had, period.

After all that lovelyness it was time to leave. It’s a 5 hour drive to Khajuraho. 200KM in 5 hours. Rough, unpaved and some paved roads. I’ve seen enough country side for a while.

When we arrived at the Radisson Khajuraho our local agent met us to give us bad news. There was a mechanical issue with a plane on the local airport runway. I googled it and found that the plane we’d likely be on tomorrow had a hard landing 2 days ago and broke something on the landing gear badly. Everyone got off safe but, it’s currently parked/abandoned on the runway and the airport is closed. What should have been a 1 hour flight to Varanasi will now be a 10 hour drive on some of those same shitty roads. Oh well, more country side it is. Not much we can do about it.