We found some cellular signal so we can update.

We cruised north overnight to Genovesa Island. We arrived around 6am. The ocean was a big rough at times but Kris didn't get sick. That's the important part. We were worried that she may. She has good drugs!

The view from our boat of the bay. 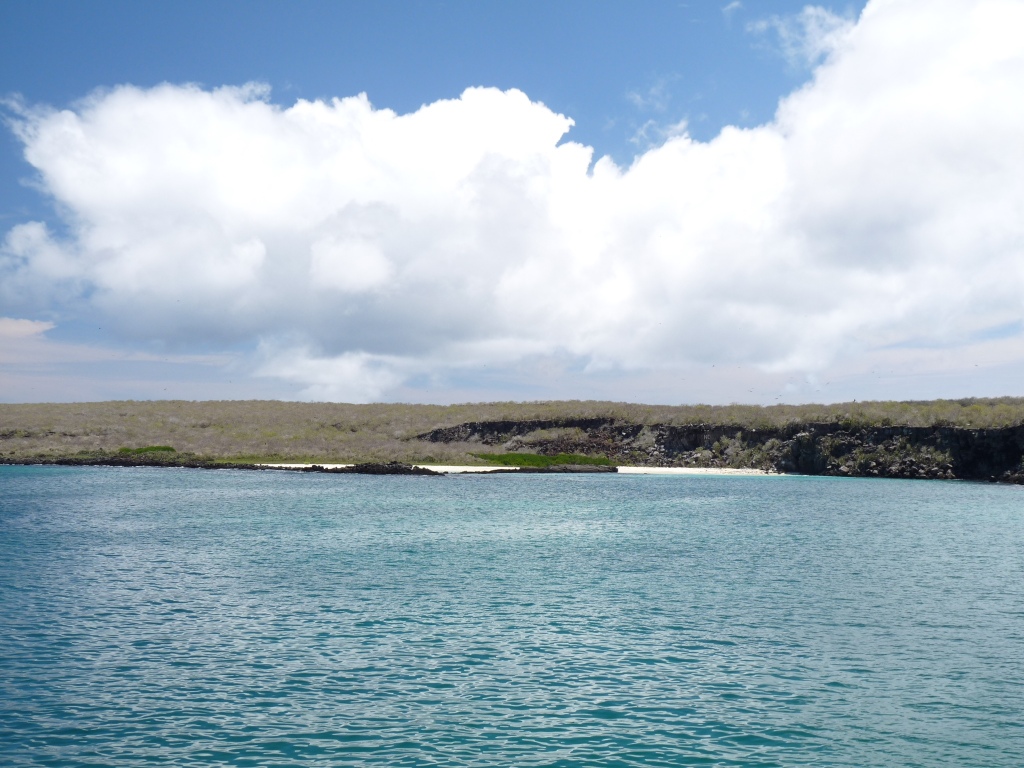 Genovesa is an ancient,collapsed,horseshoe-shaped volcanic crater.

El Barranco (Prince Phillip’s steps), were carved from the rock and are used to access the top of the cliffs. 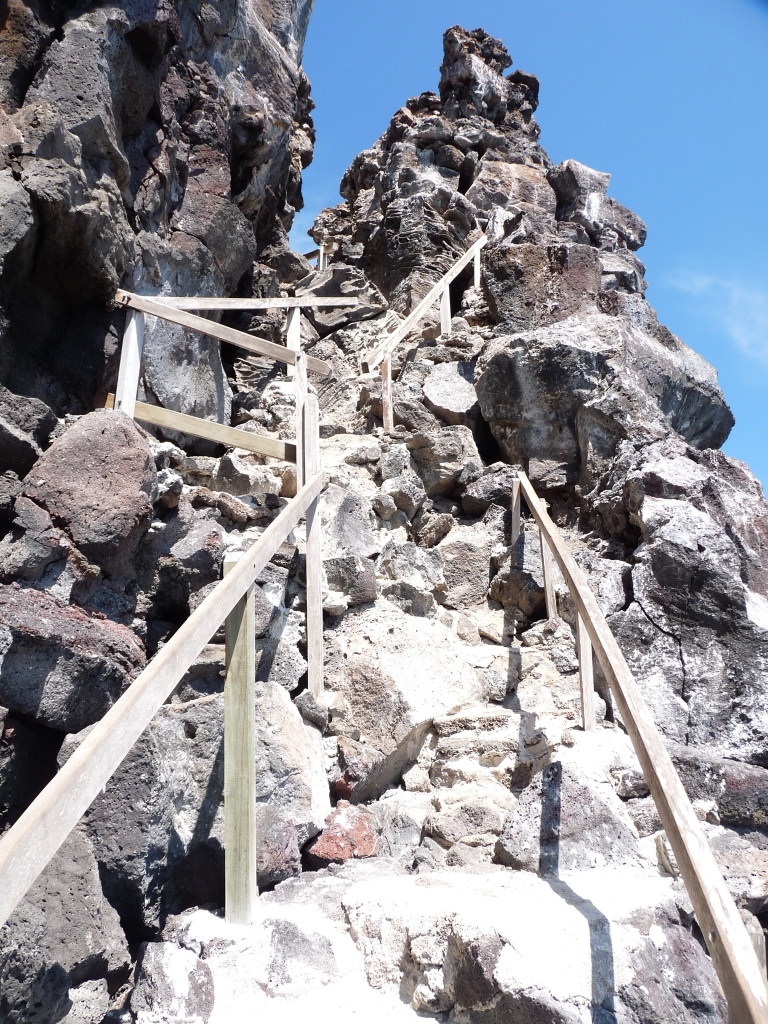 Once we reached the top is was bird central. Thousands of birds. Red footed boobies, Nazca boobies, frigate birds, storm petrels, mockingbirds, tropical birds, gulls. And down on the rocks Fur sea lions lazing about. 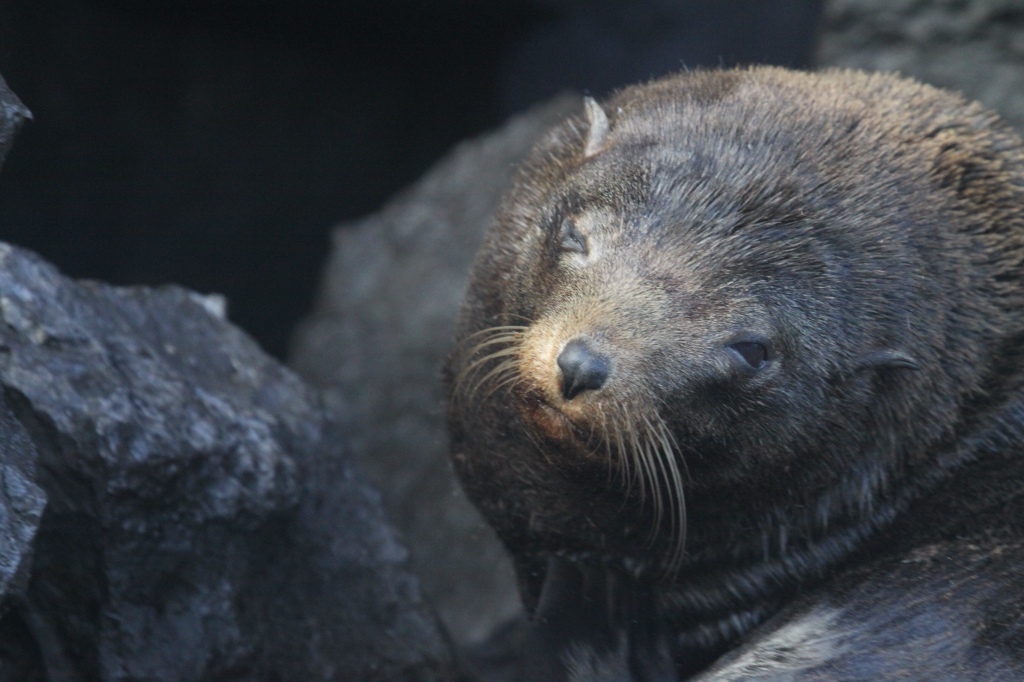 There were just tons of birds everywhere. Behind us in the above photo are male frigate birds trying to attract a mate. They inflate the red skin of their neck and make a gobbling sound like a turkey when the girls fly by!

The Nazca boobies are the largest of the three species of boobies in the Galapagos. They are about the size of a small Canada Goose. They create a very simple nest of twigs and rocks on the ground. We saw several chicks and moms incubating eggs. If a boobie lays more than one egg, they will lay the second around 5-7 days after the first. The second chick, then, hatches a week or so after its older sibling. Sometimes mama decides she doesn't want to raise two kids, and pushes one of the eggs out of her nest.

The one on the left above is about 3 weeks old. Below about a week.

Very fluffy still. The parents must protect the young from the frigate birds.

There are also the much smaller and more rare Red-footed boobies. The red-footed boobies are adapted to nest in the trees. They build more intricate, but still simple, nests of twigs and greenery. We saw many birds pulling small branches off the nearby Palo Santo trees to add to their nests. 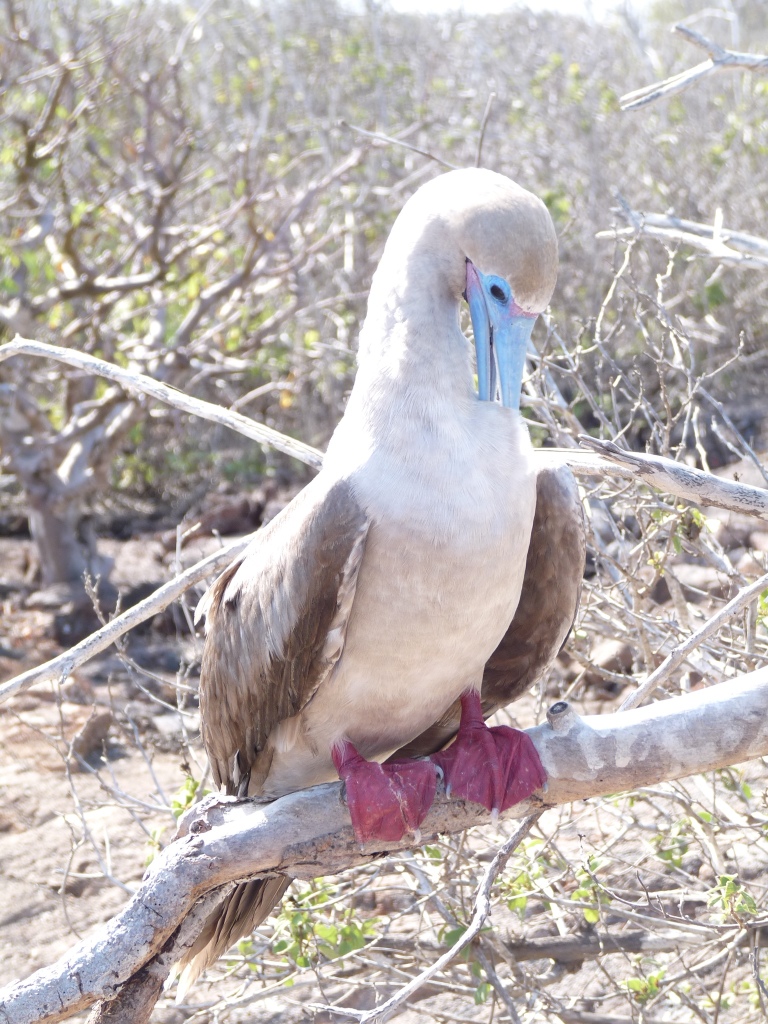 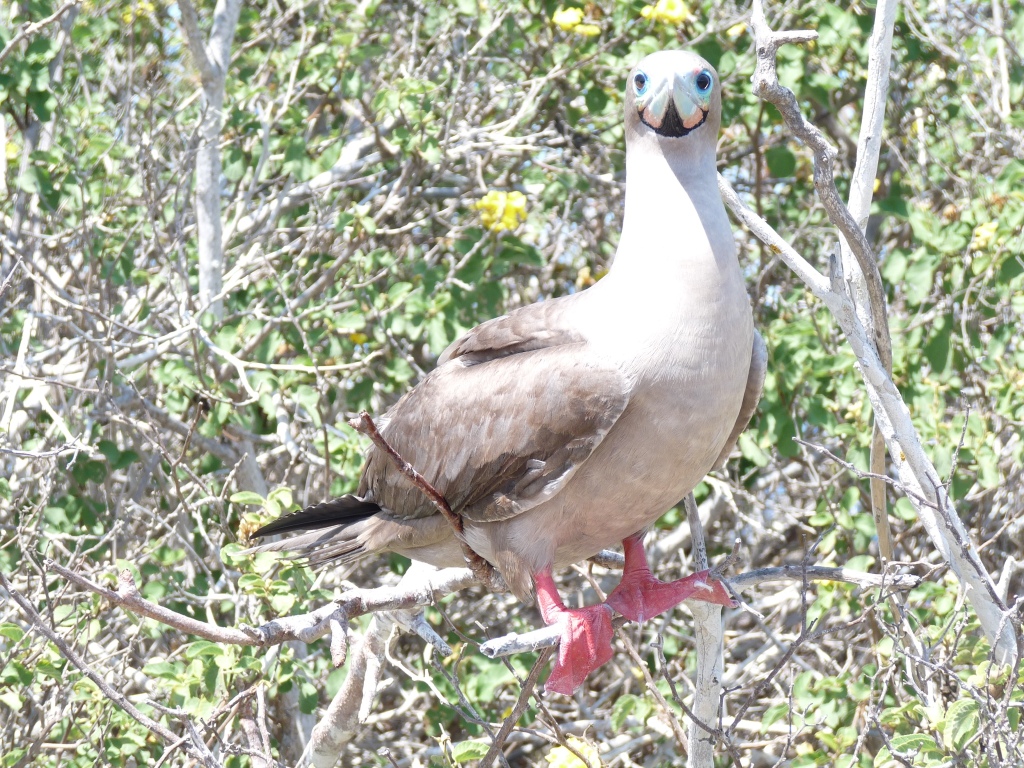 Like I said the frigate birds were everywhere. We got lots of good shots of the males trying to attract a girlfriend.
Barely puffed up. 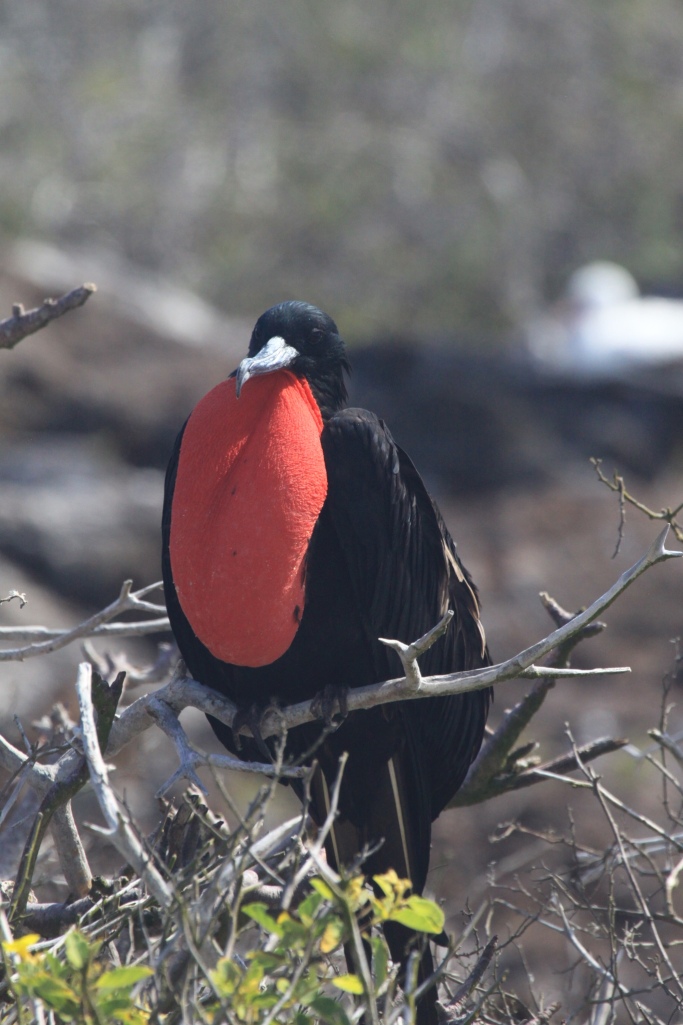 And wings spread making a turkey like noise saying “Look at ME Ladies!” Pick me, pick me! 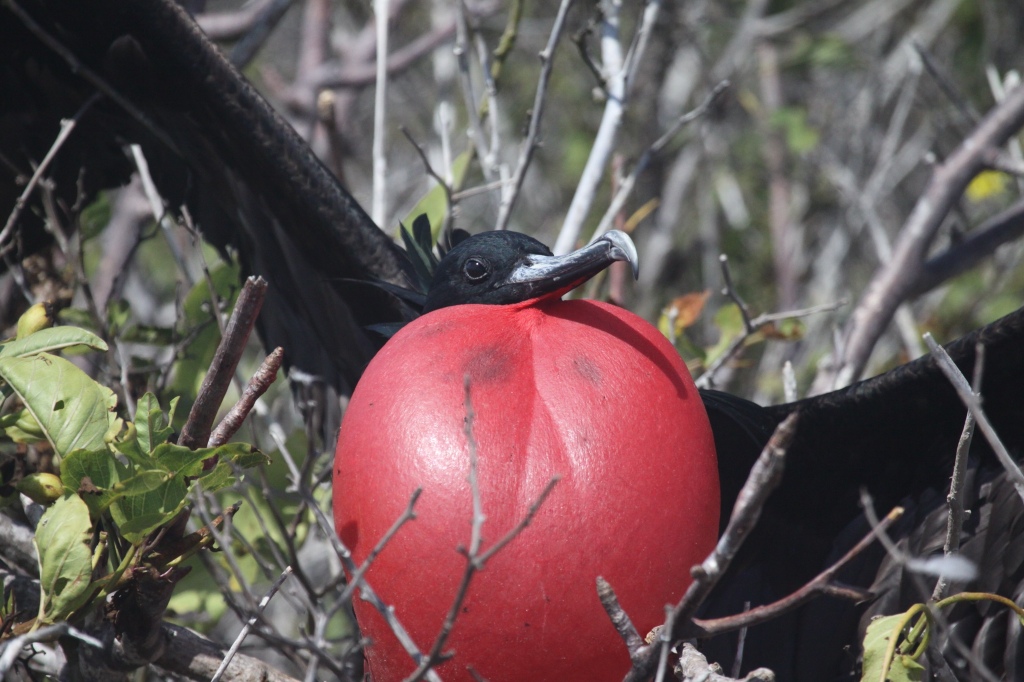 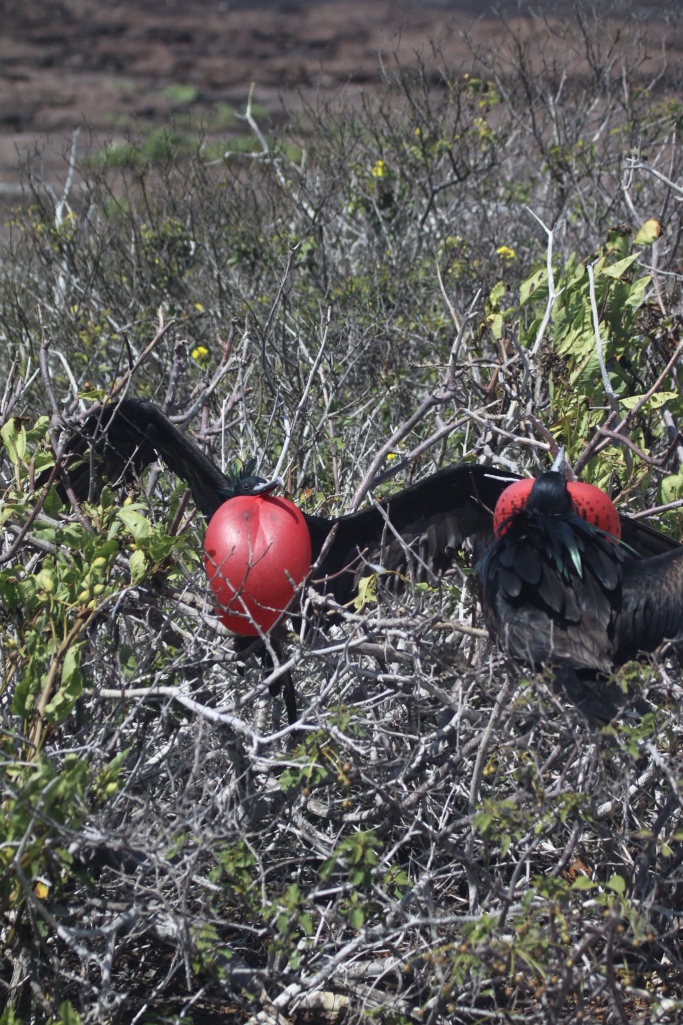 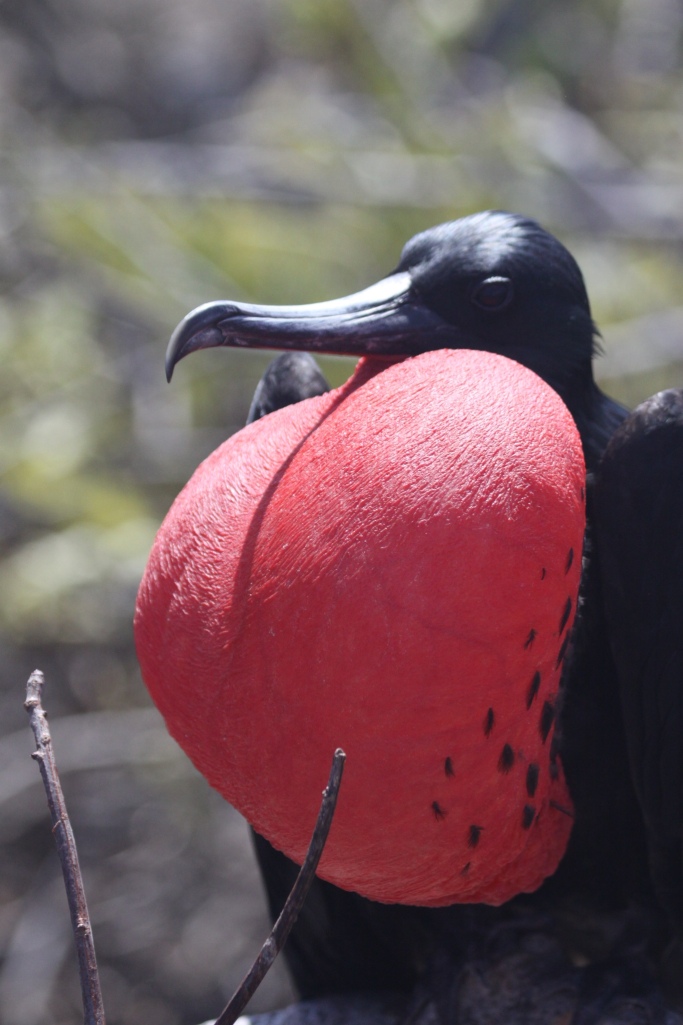 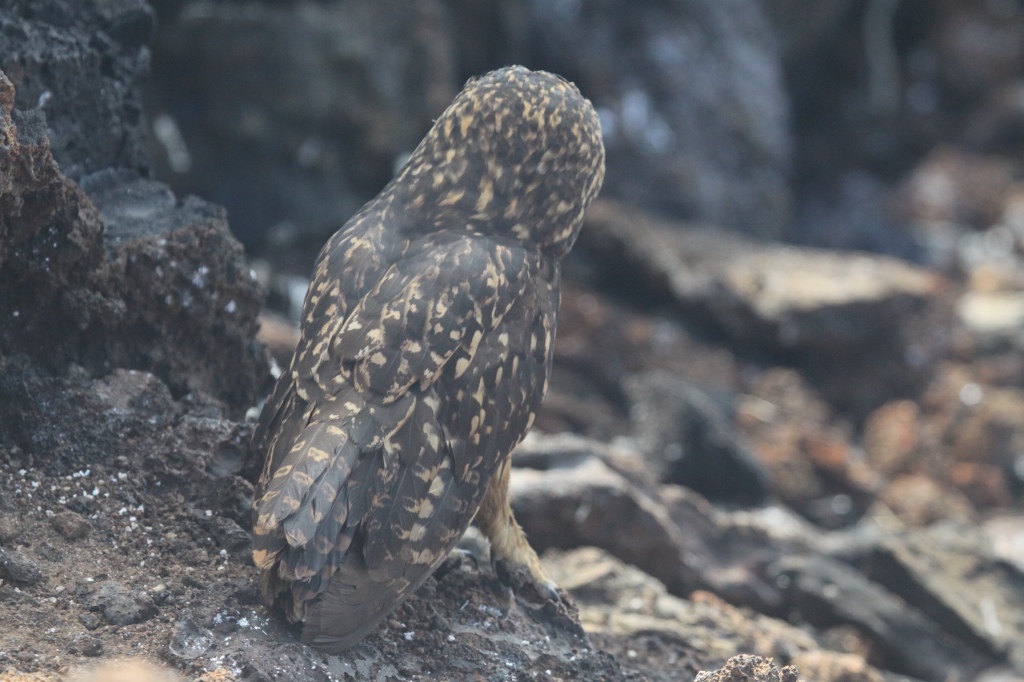 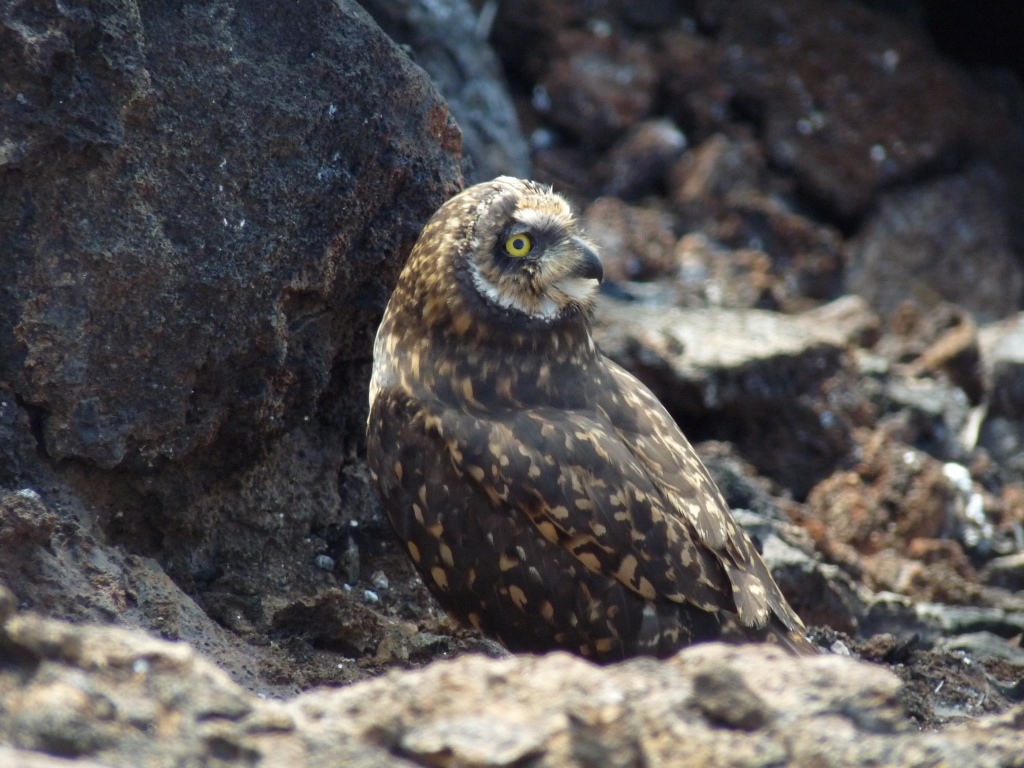 The walk was through the Palo Santo trees. It means Saint Wood and was used by the Jesuit priests to make incense.

The red footed boobies liked to sit in the trees. We found that unusual as they are web footed.

After a couple hours it was time for a snorkel to cool off. We saw lobster, surgeon fish, parrot fish and a fur seal.
Then after a siesta, it is hard work seeing all this stuff after all, it was off to Darwin Bay for another beach walk and more snorkeling.
There were a few fur sea lions snoozing.

Me doing my sea lion impression. 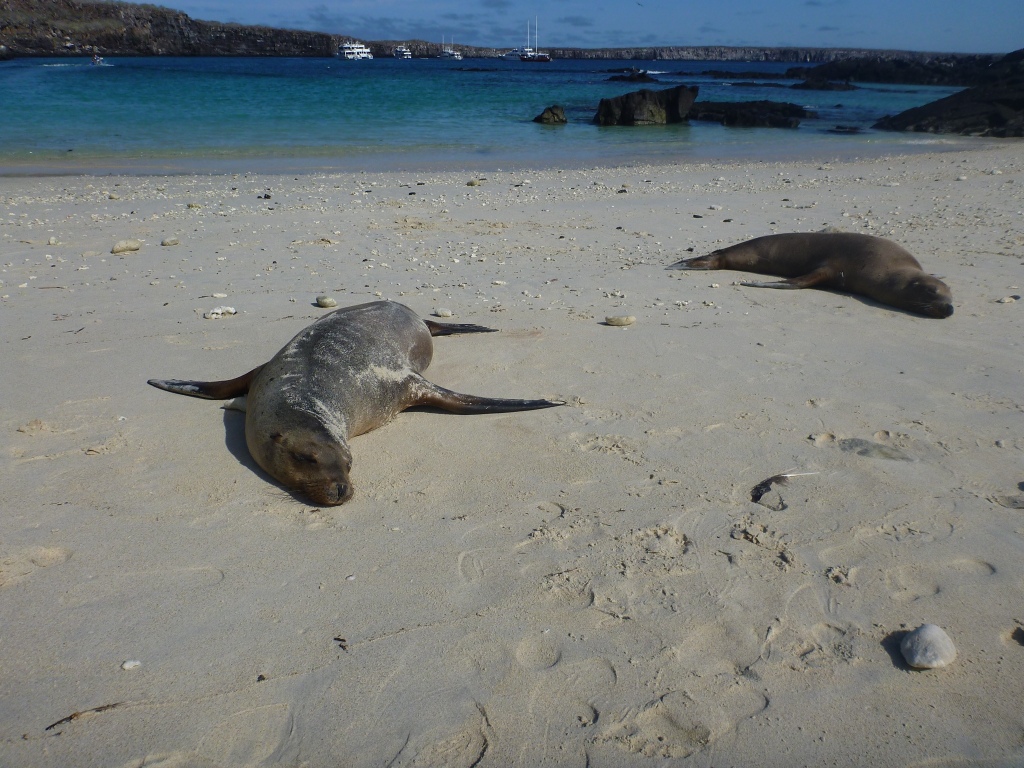 Right on the beach is a whale skeleton. No one is sure what kind of whale. We guessed orca.

And you guessed it, more frigate birds and red footed boobies. 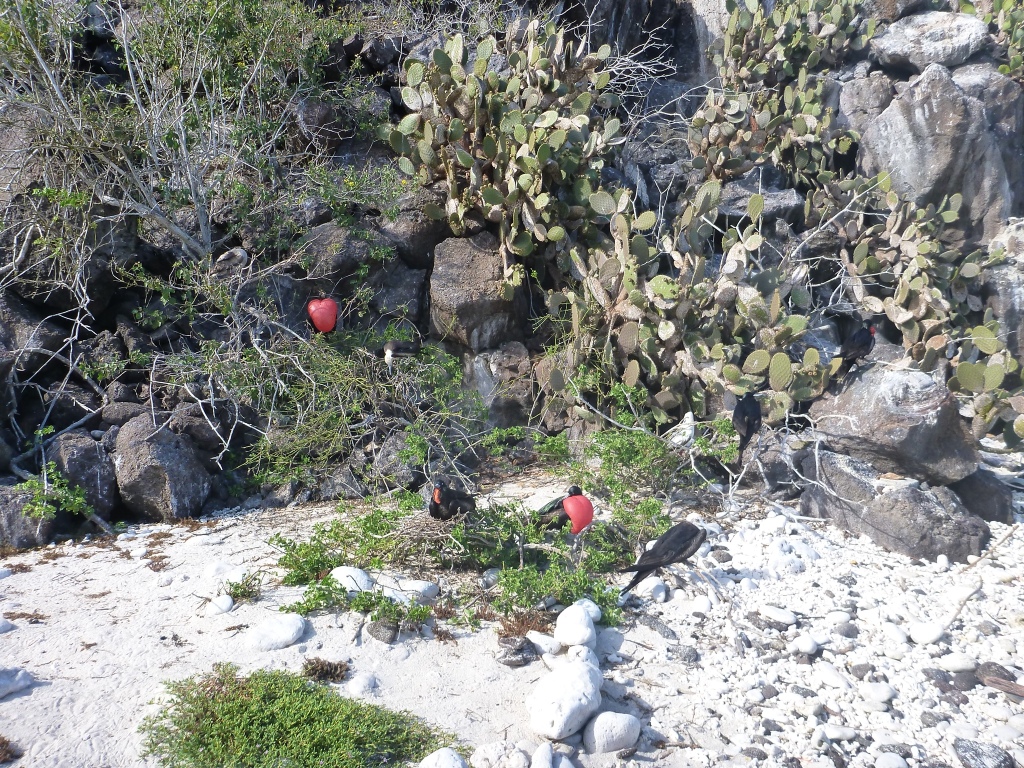 We also saw the swallow tail gull. Prettier than our glaucus gulls and much much quieter 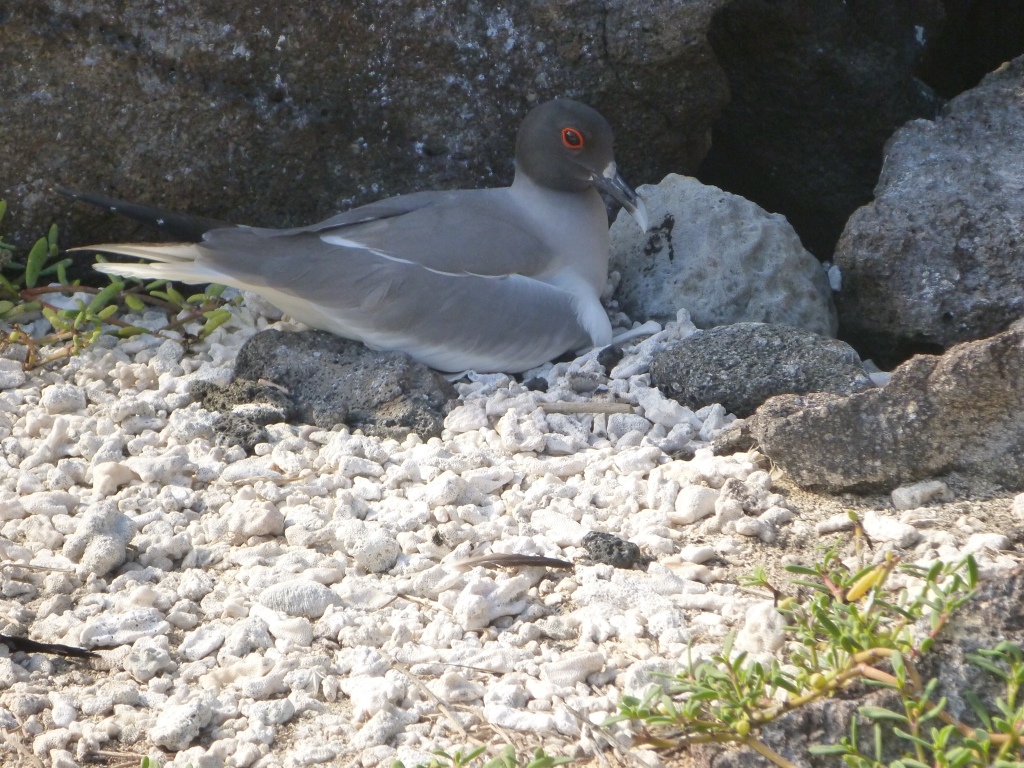 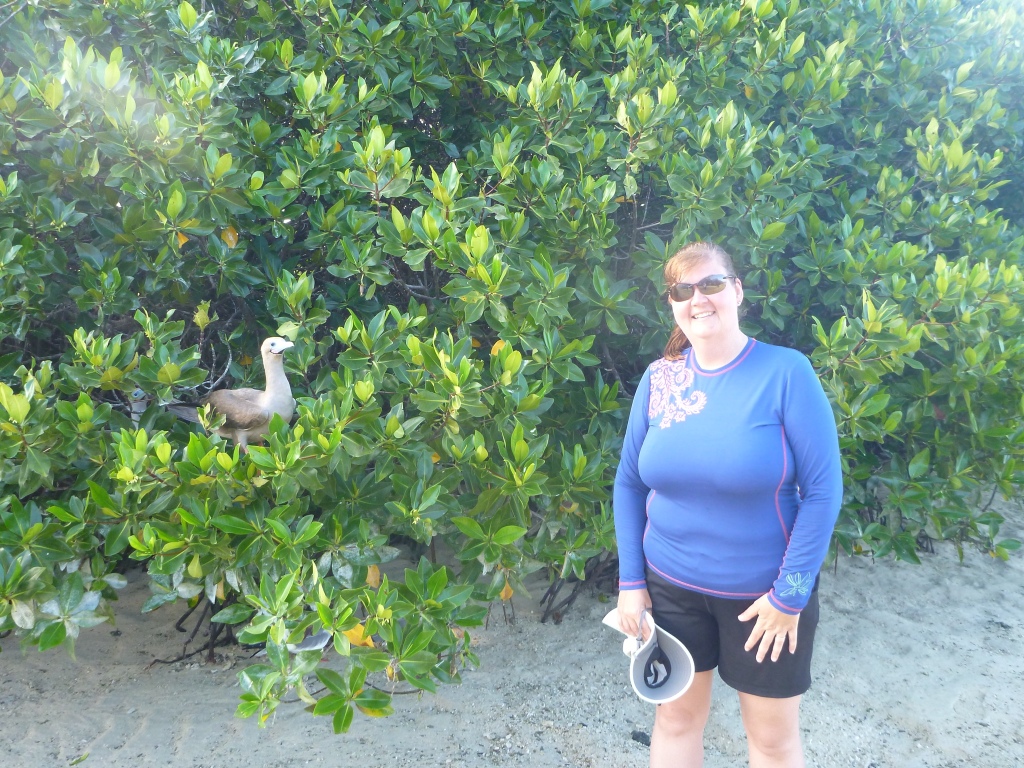 Such a beautiful area. 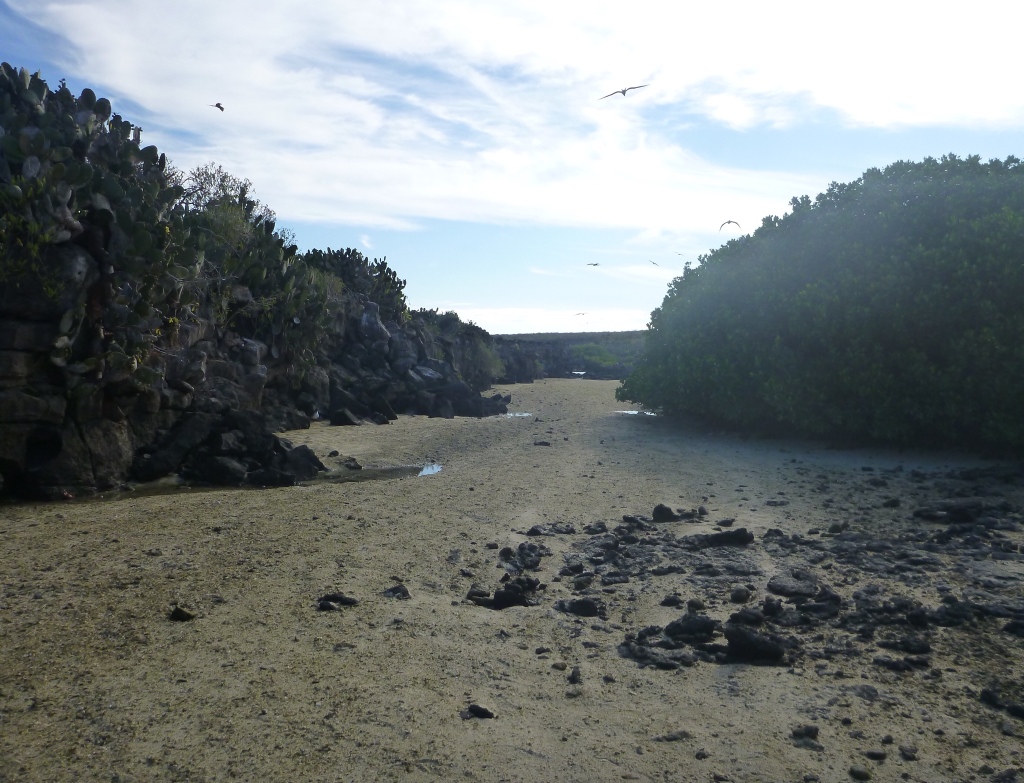 Here the Opuntia cactus doesn't have hard spines, as there are no iguanas or cactus finches to eat the leaves. Plants and creatures behave quite differently when they do not have any natural predators around. 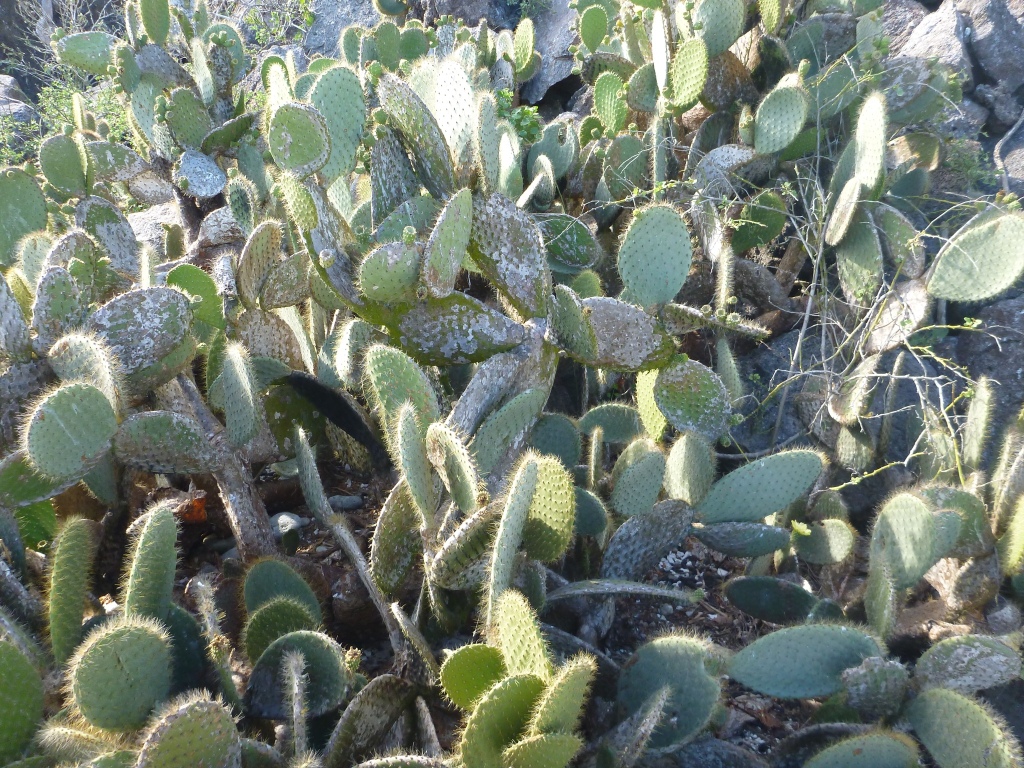 Love these guys. We had been on the beach (with a few other tour groups) for 1-2 hours, and they barely moved. One lifted his head once, and the other one may have stretched a bit!

Tonight we have a welcome cocktail with the boat's crew (was supposed to be last night, but the bar ran out of something) and then sail to Bartolome for tomorrow's adventure.