After a great night's rest in this amazing hotel we had buffet breaky. Eric was happy the scrambled eggs were nice and hot. None of us is leaving hungry, that's for sure. A quick walk down the block to pick up the car at the parkade and we are off to Monteriggioni. Monteriggioni is a medieval walled town built by the Sienese in 1214 – 1219 as a frontline defense in the war against Florence. The walls are roughly circular with 14 towers (mentioned in Dante’s Divine Comedy “the towers evoke the sight of the ring of giants encircling hell”). The Porta Fiorentina is the northern facing opening in the wall, facing Florence; the Porta Romana is the south facing opening, facing Rome. The main street runs roughly in a straight line through town between the two gates. It was also featured in Assassin's Creed Brotherhood (a video game) as the headquarters of the hero's family. It served as the headquarters of the Italian branch of the Assassin Order from the early 14th century, when Domenico Auditore renovated the villa, to the year 1500, when the town was besieged by Cesare Borgia. It's cool that the game has the history quite accurate. They did take some artistic license on the actual town. But Ryan says it's pretty good. He should know, he would have spent many hours climbing all over the walls.

Back in real life, we got to walk on the walls and because we were deliberately there early there were no real crowds. There was a festival today but it didn't start till 3pm. We got there around noon. Great choice indeed.

Town view from the wall climb that you can do: 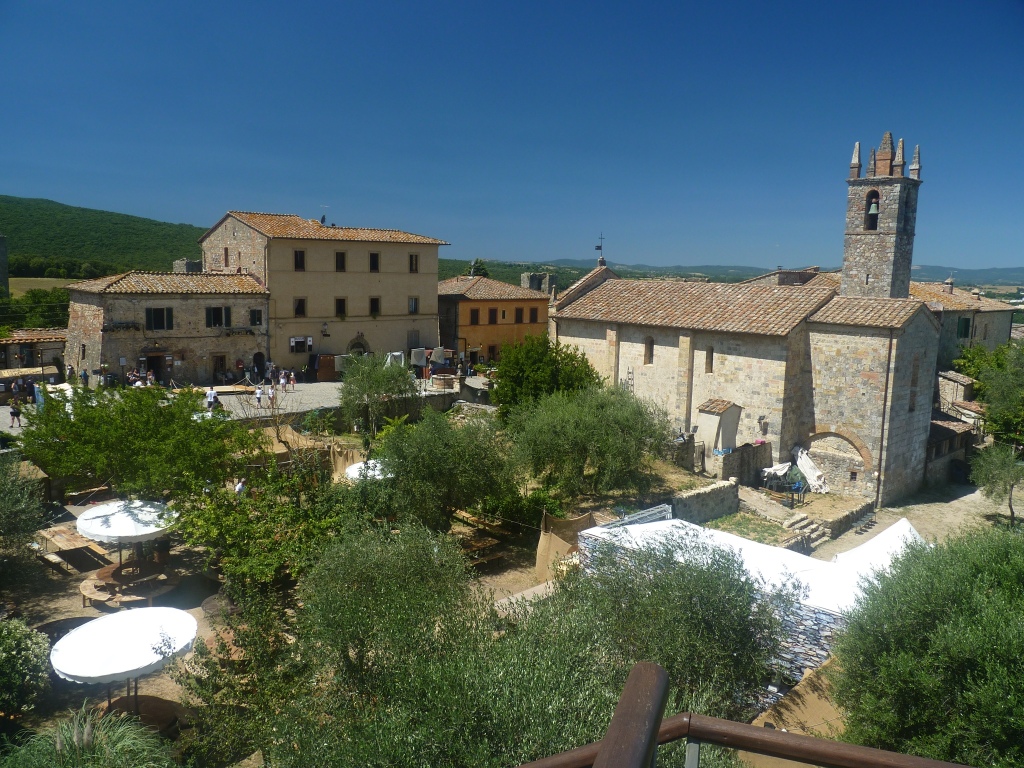 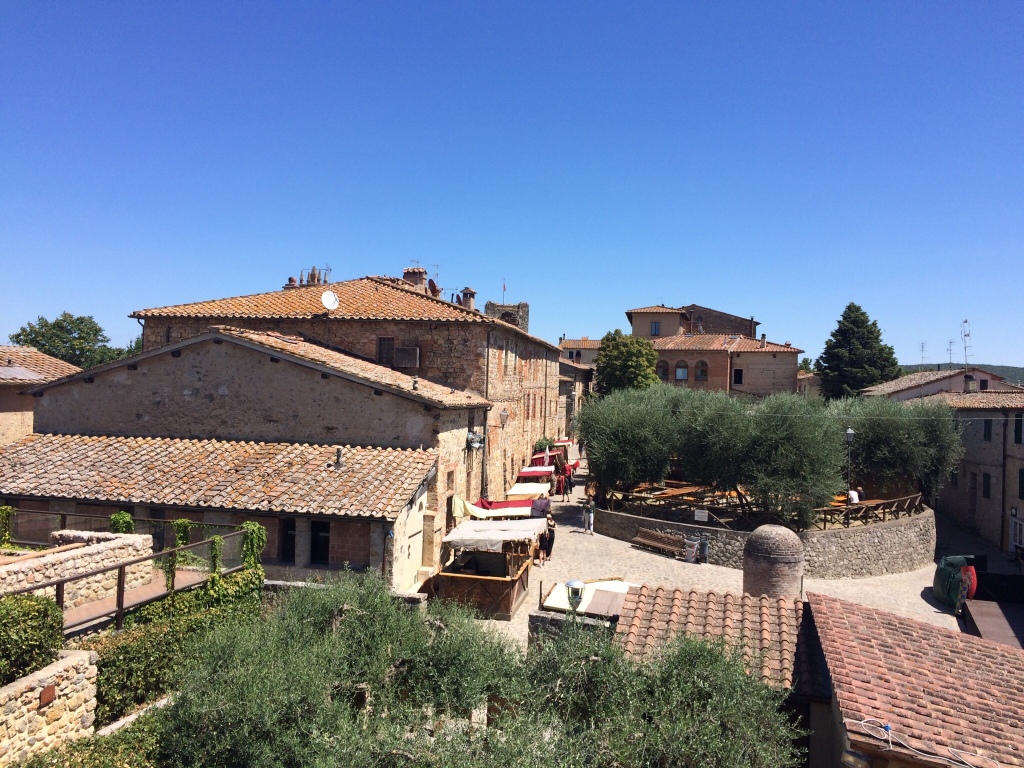 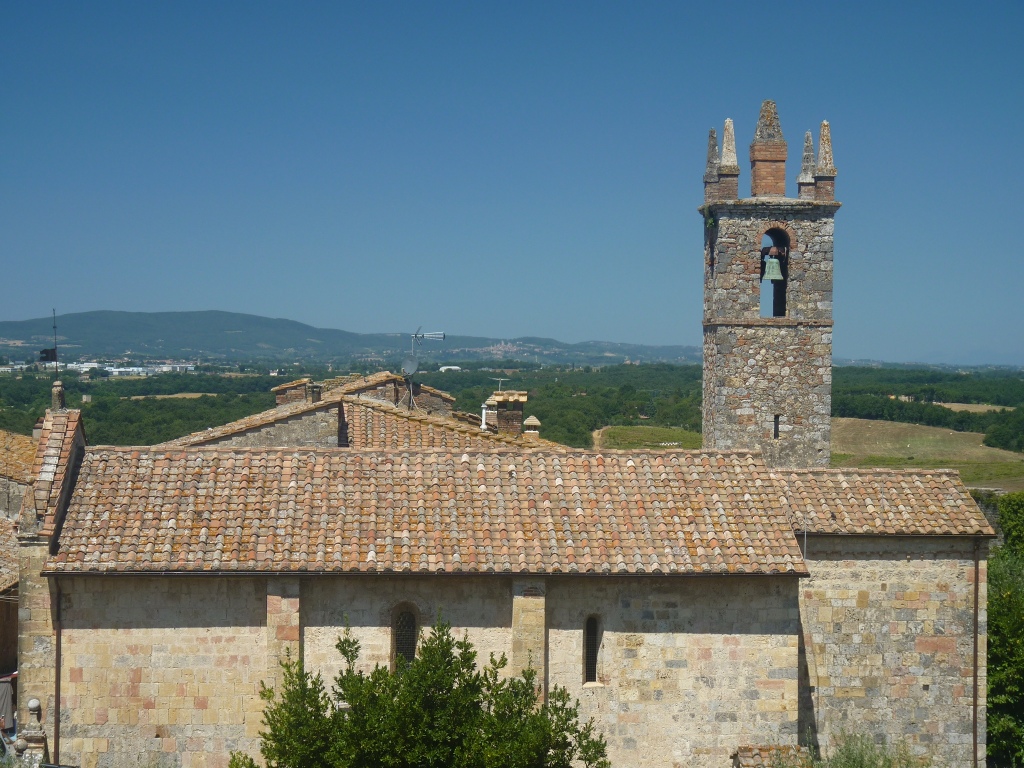 Up on the wall: 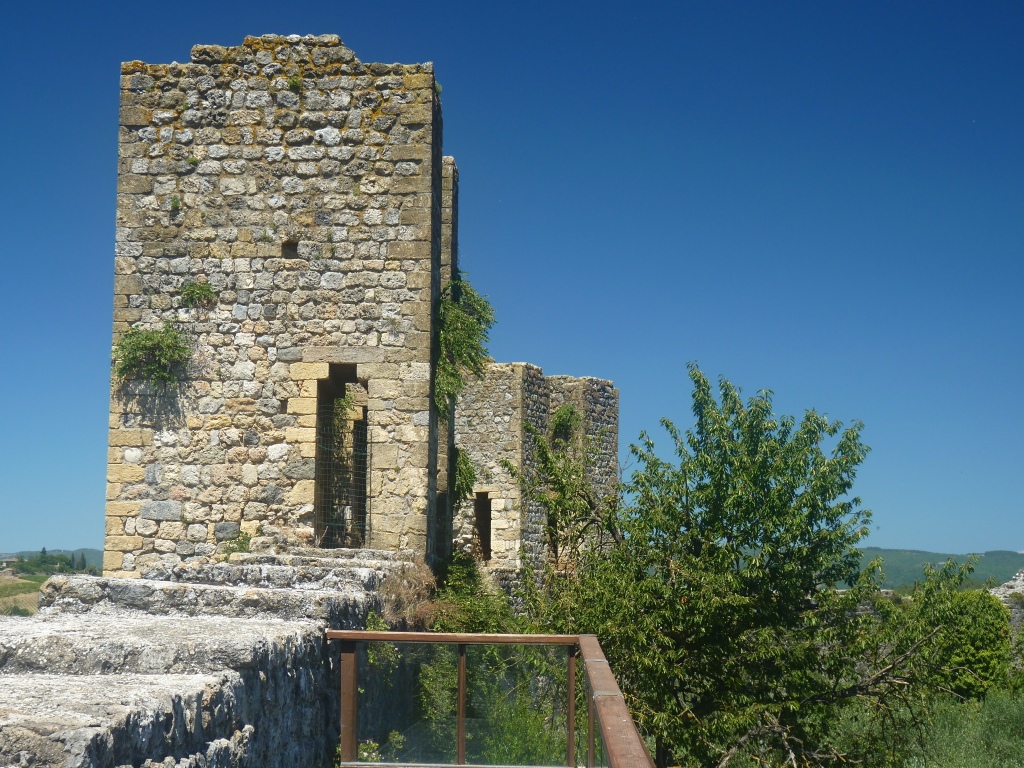 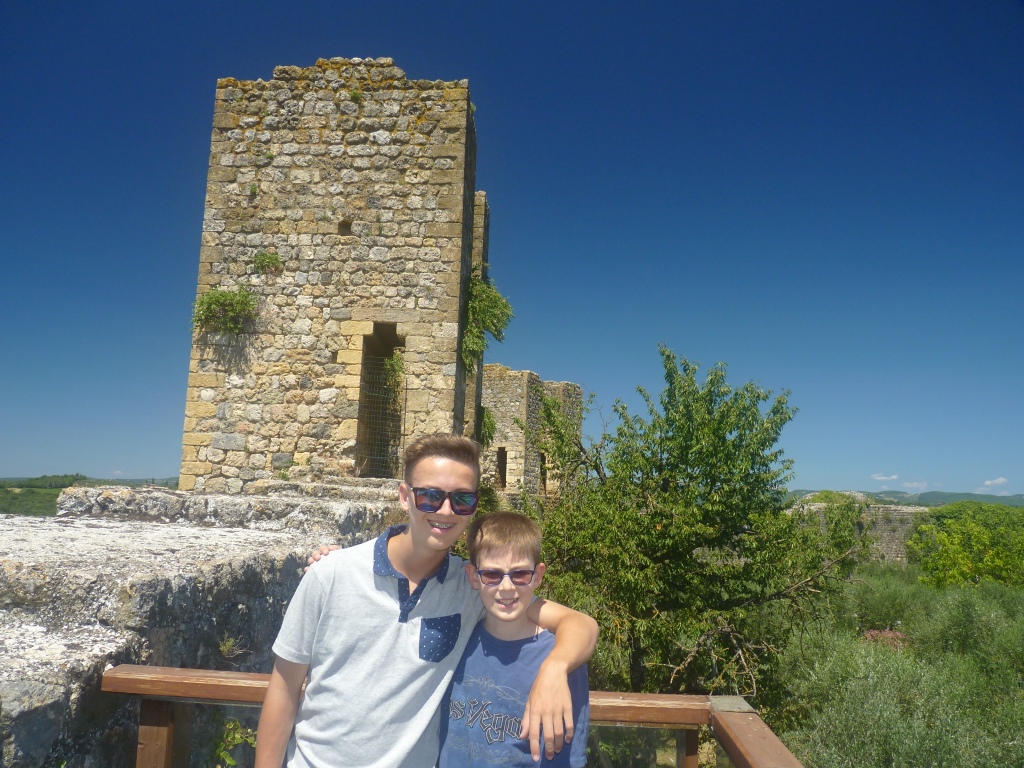 We then toured a Templar museum and tried on a few armaments. 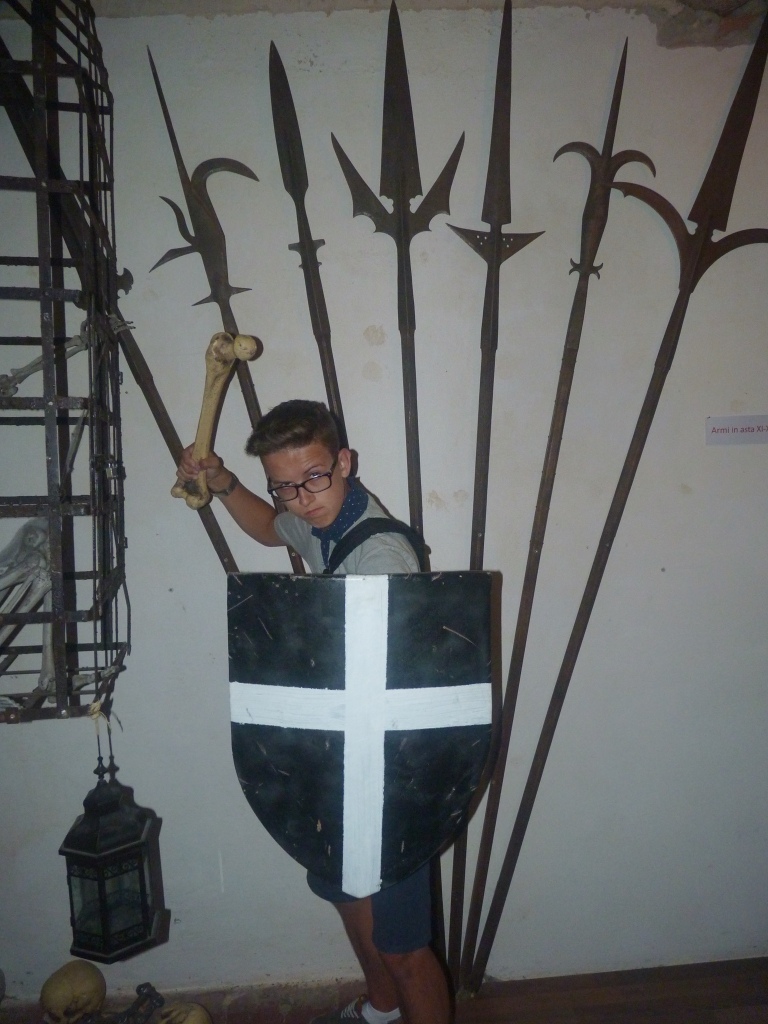 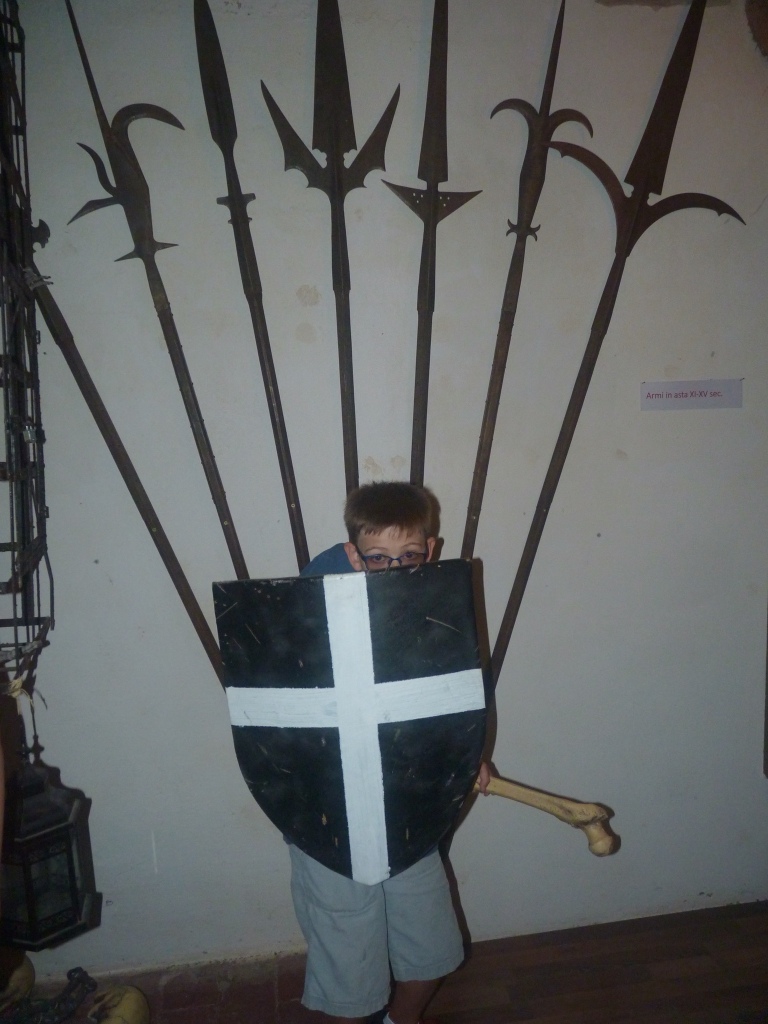 Just upstairs was a very nice lunch of Tuscan meats and cheeses. And maybe a Chianti for Dave.

After lunch we went to the town museum and tried on more weaponry. 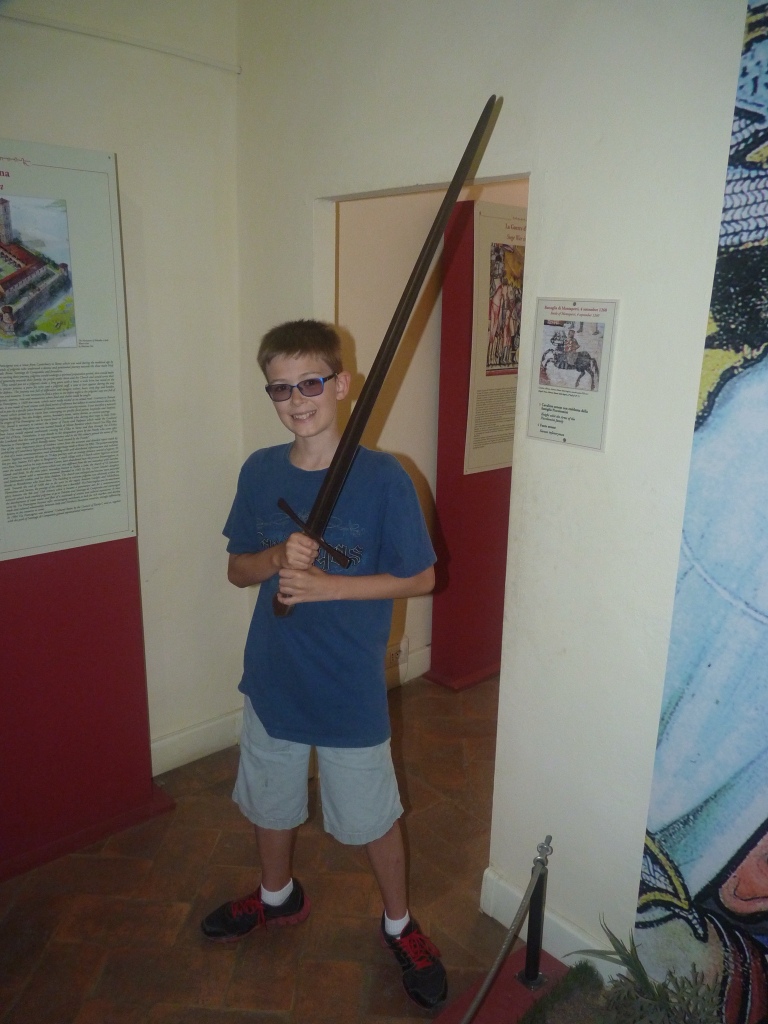 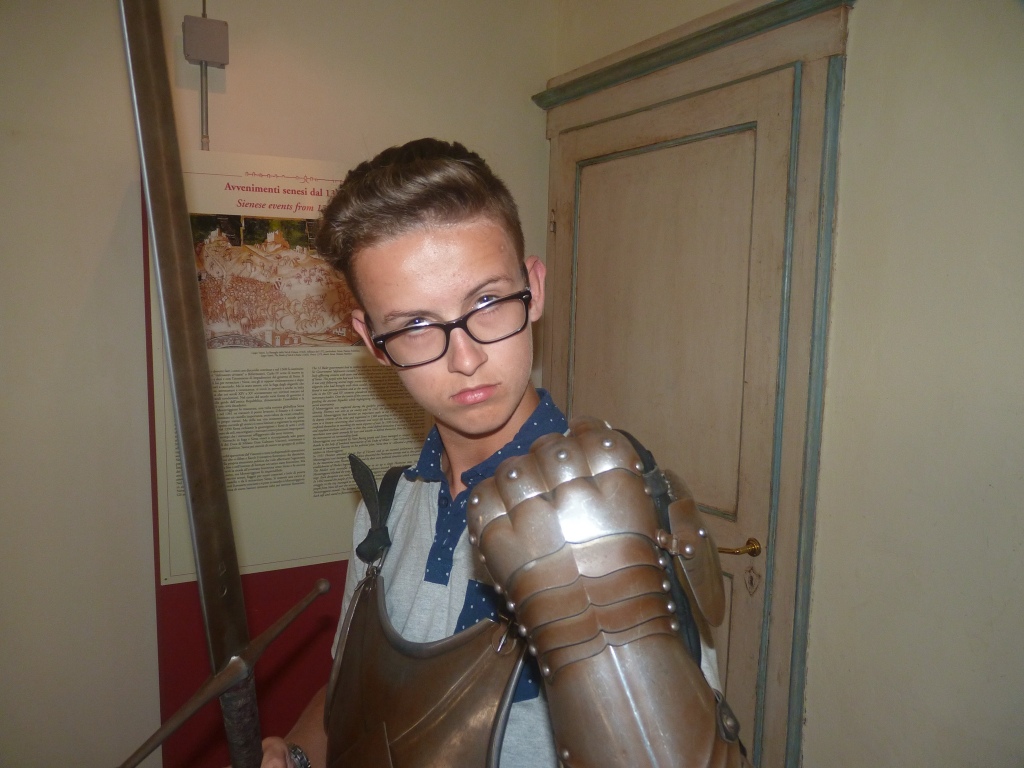 We also found a Pillory. This is the medieval version of no wifi. 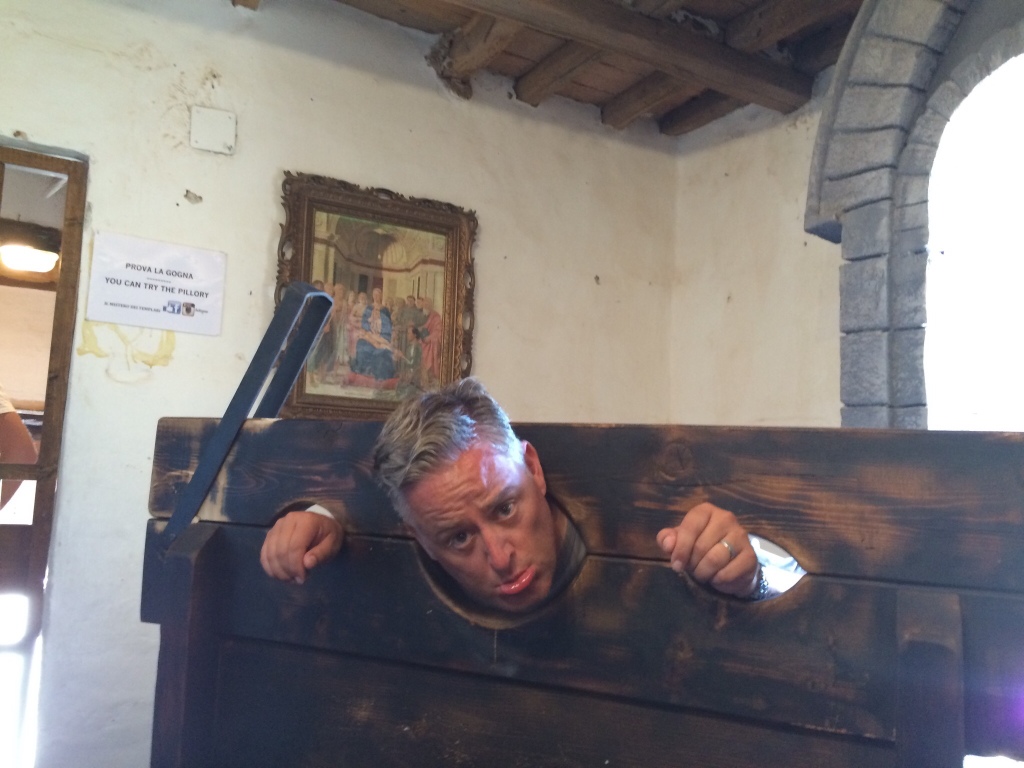 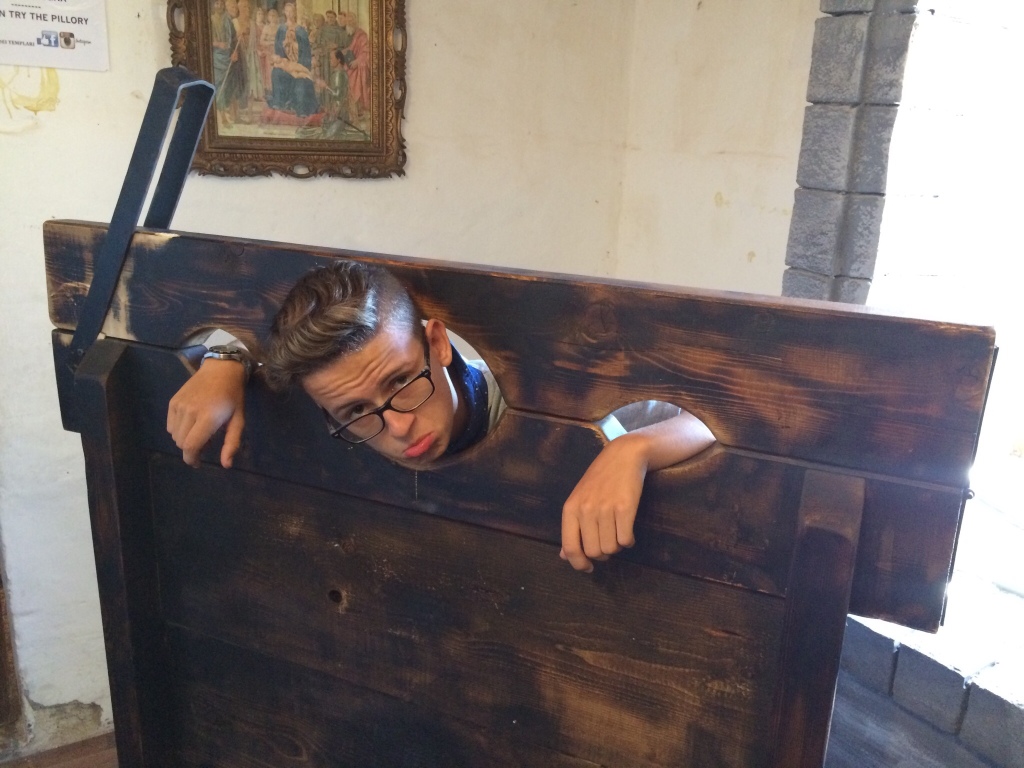 Although Eric still seemed to have wifi. 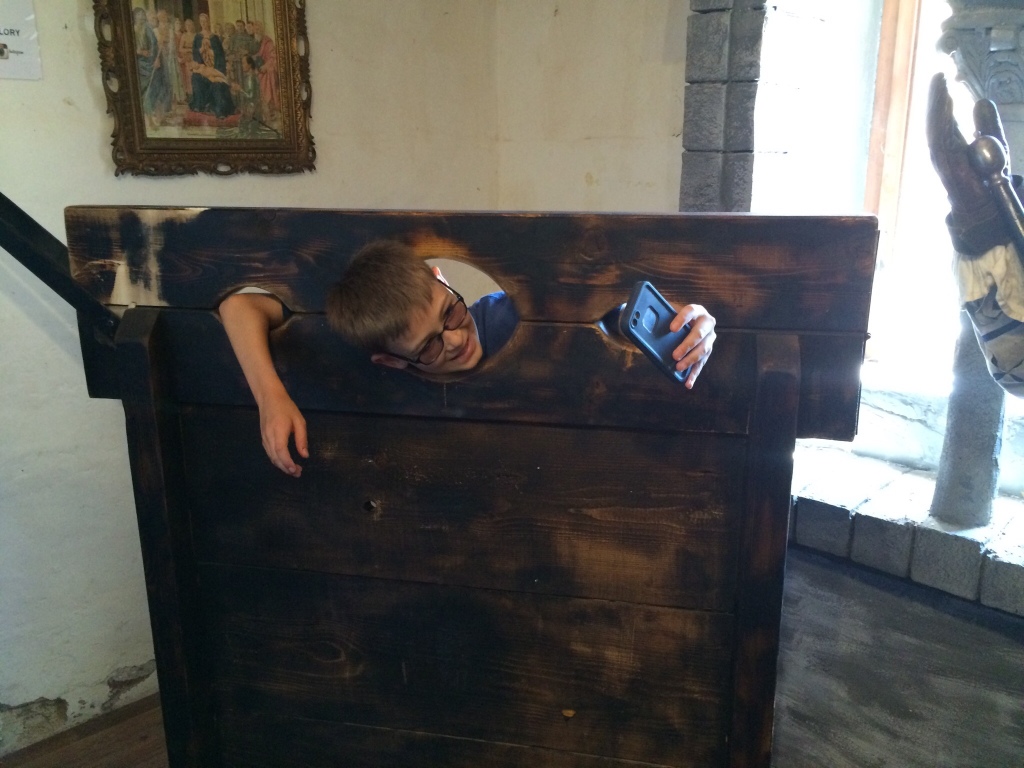 Then it was off to browse the market place. Kris found two purses from the local tannery and leatherman. Not like her to shop but she found some great purses and local prices.

Ryan found a stilletto from a local blacksmith/forger. It's quite simple and elegant. I may have found an organic brewer….

Ambratta (Amber) and the blonde were both very tasty. Of course Eric also found the gelato place. Must be the Shaw genes on finding and needing ice cream.

Olive trees – growing boys and olives at the same time: 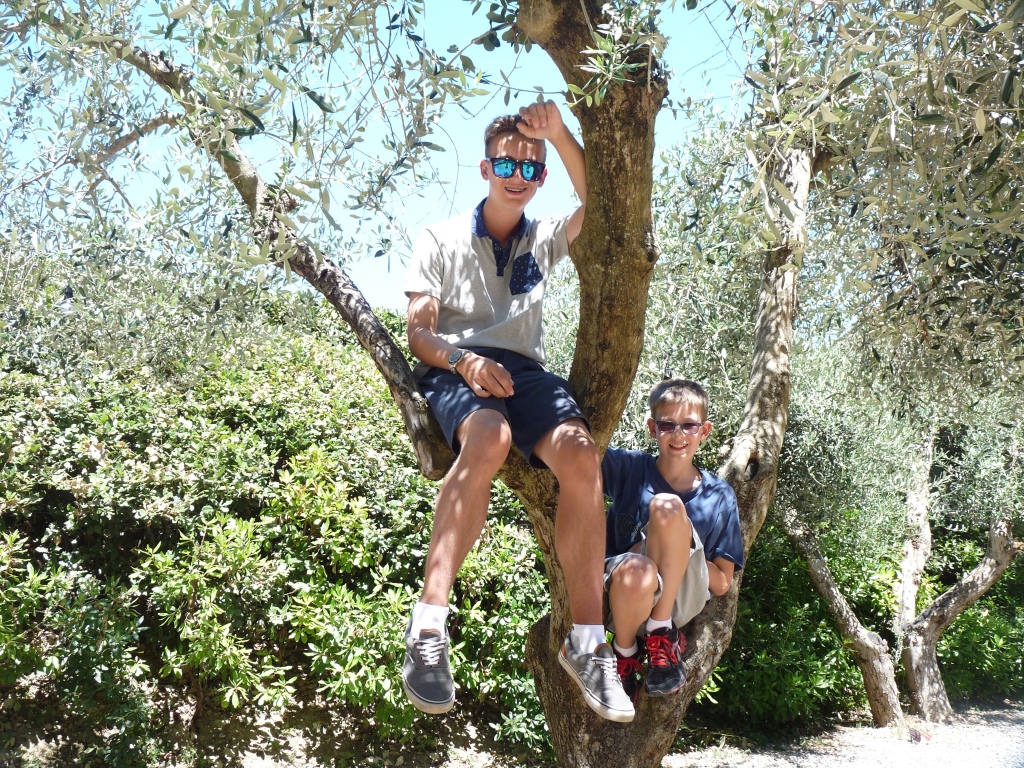 By now it was 3pm and the festival was starting. Street performers and folks in period dress all over the place. Very cool and worth scheduling our trip around it. 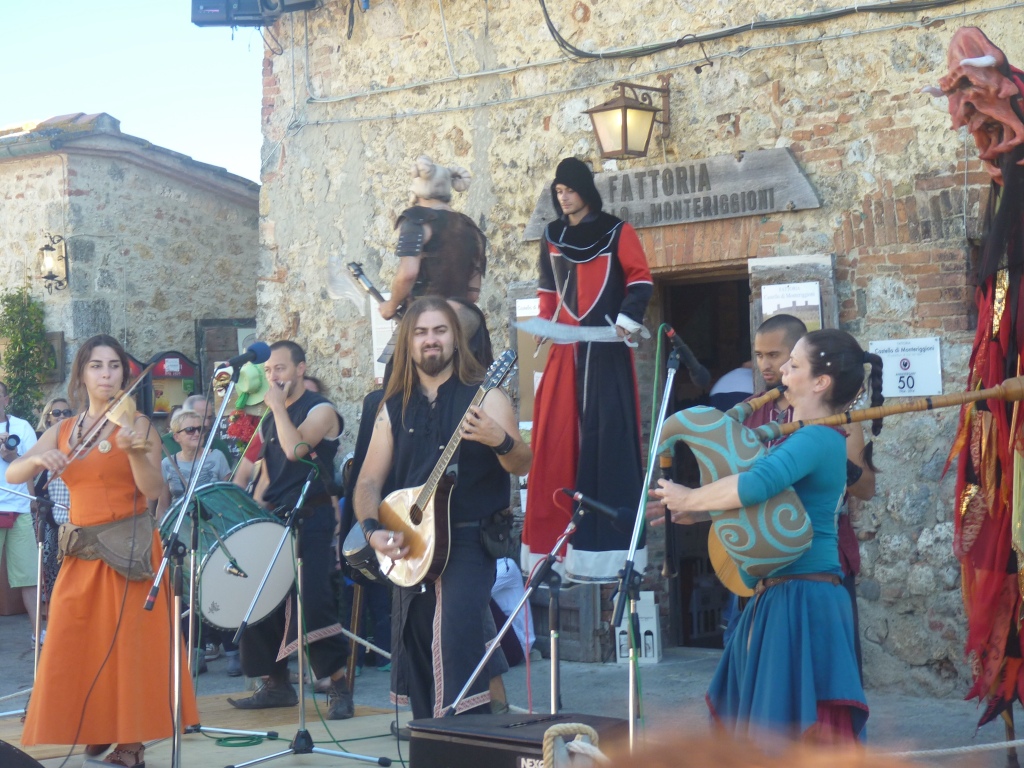 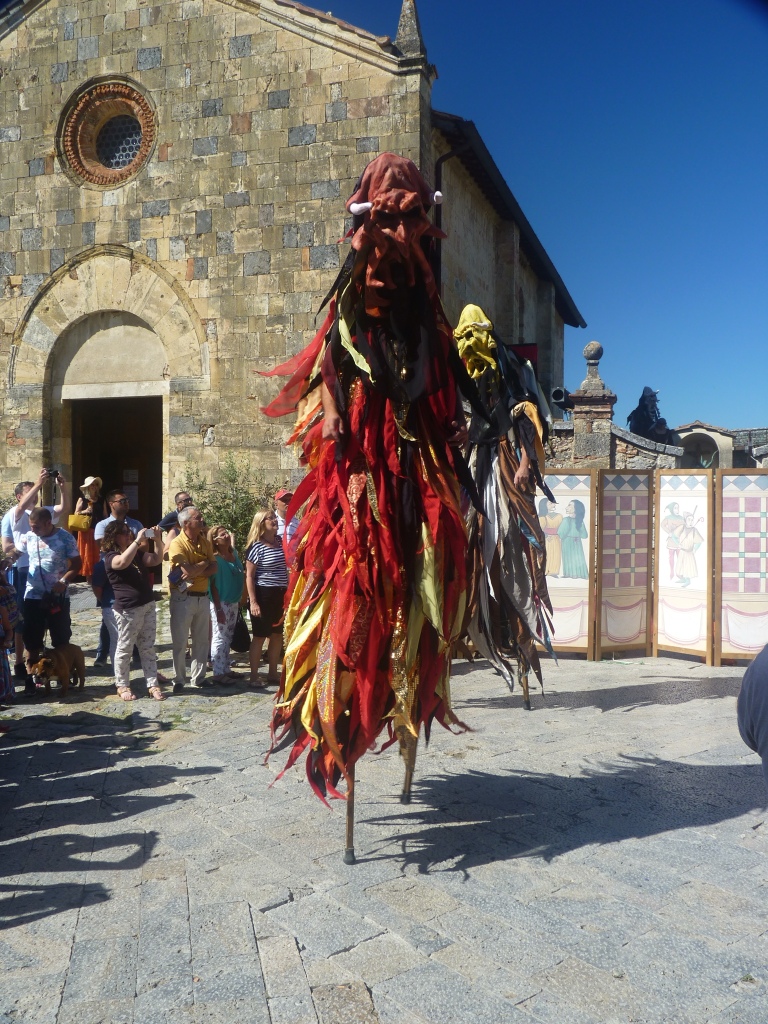 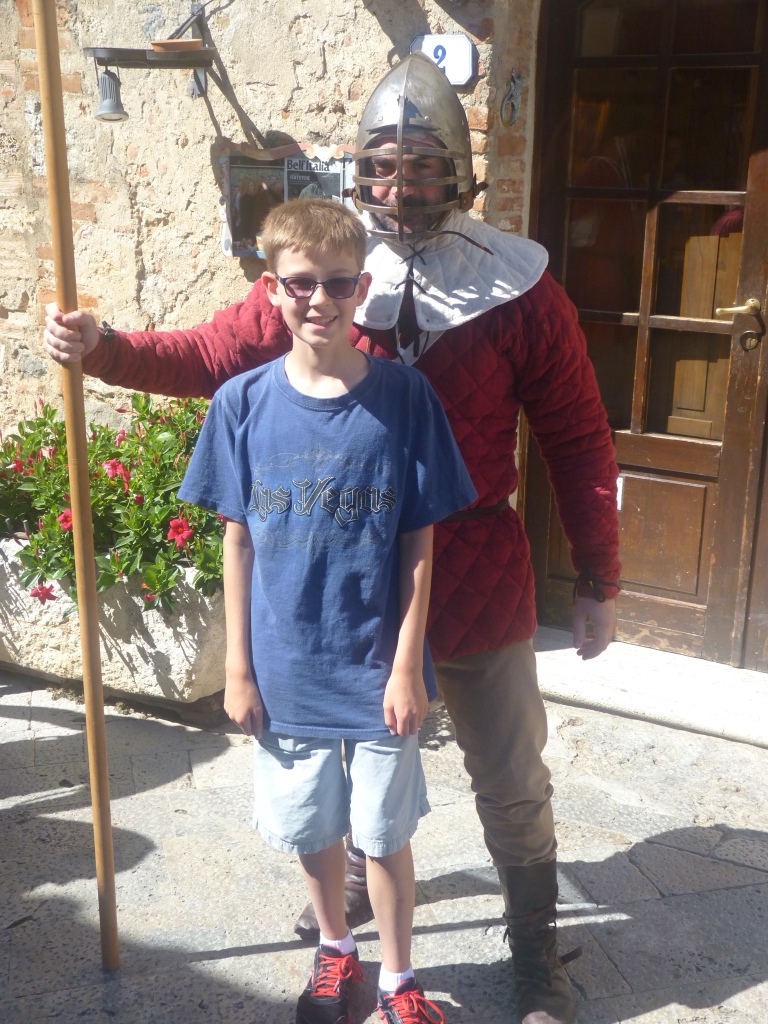 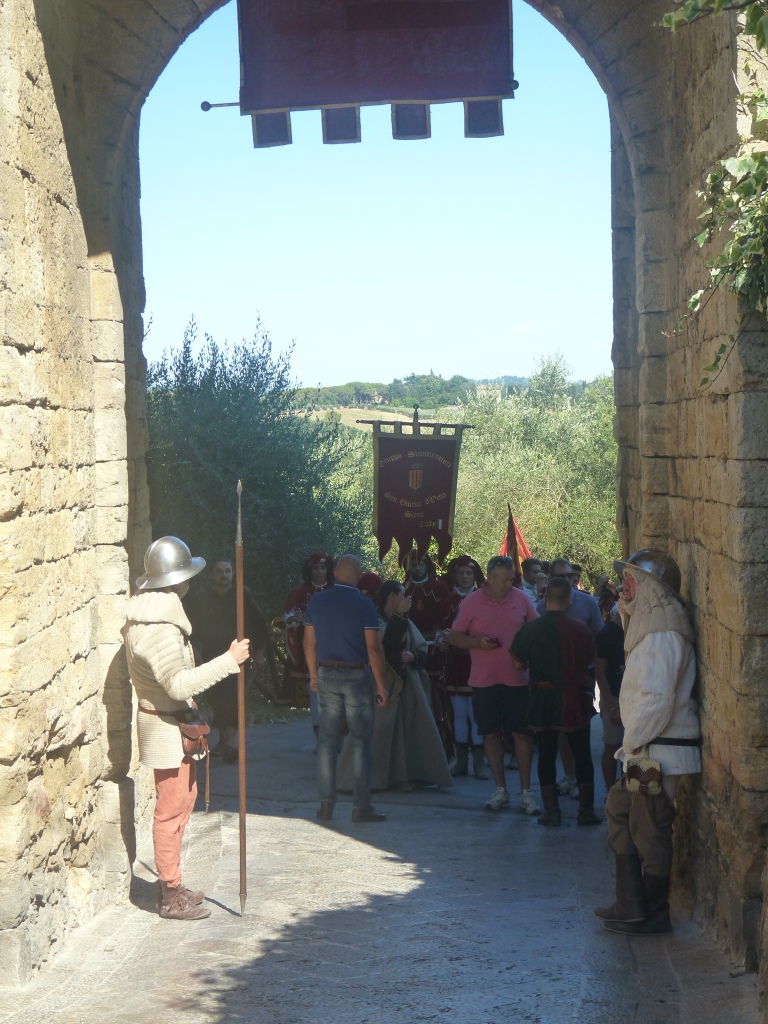 Finally we went across the valley to some farmer's driveway to get the post card view of the town. We met him on the way down, he didn't look impressed. 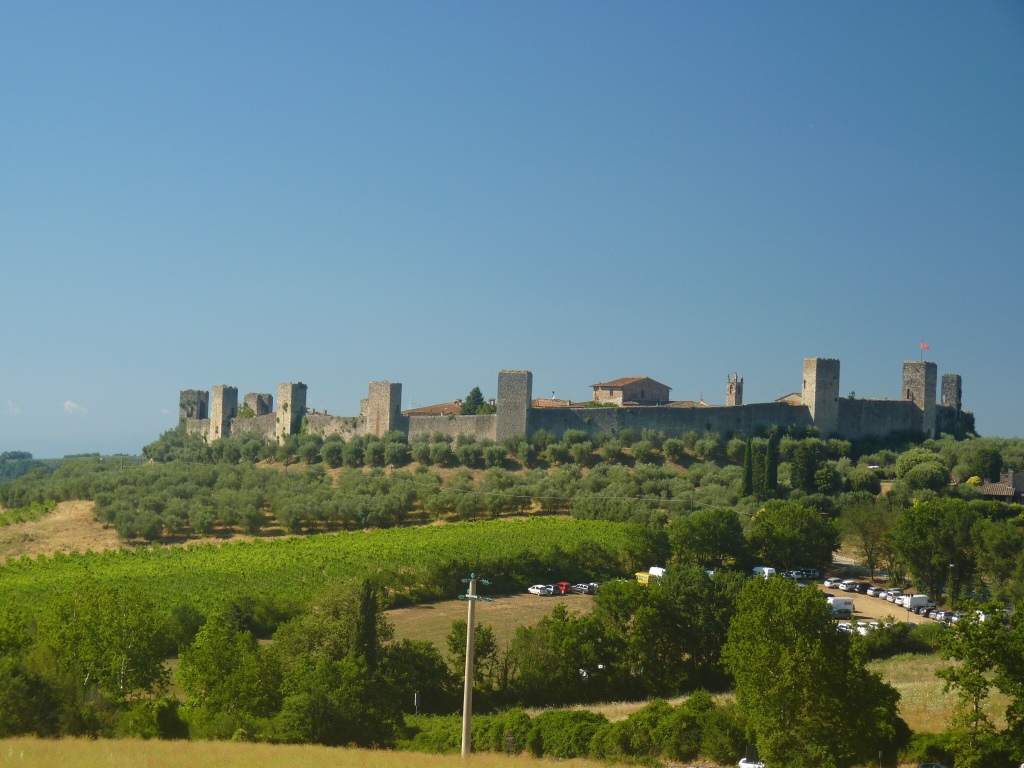 Tomorrow we are off to Maranello for some cars of the Prancing Horse variety. Ryan says we should buy one. Not sure I want that brand but I'll go look just to make sure. Kris and Eric are going to hunt for lunch – meats and cheese at various Salumeri and Fattoria while Ryan and I view Enzo's life work.